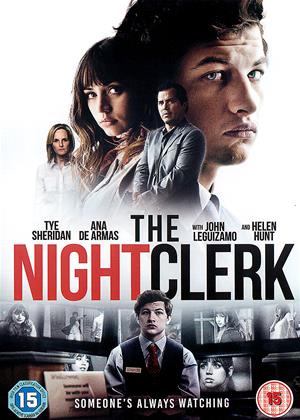 Reviews (2) of The Night Clerk

Where to start, the film is strange, dreary, waste of Helen Hunts acting talents and could have saved another 20 minutes which might have made it more cohesive.  The remaining cast tried their best but the material they had to work with was on the thin side!

I can't agree with the critics' review here and elsewhere. This is the best, i.e. the most accurate and sympathetic, portrayal of Asperger's Syndrome, in film I have encountered so far, speaking as one myself. As a drama, it avoids Hollywood black and white goodies and baddies, apart from the murderer himself. The detective is not prejudiced against Bart, nor is he tempted by the easy option of pinning the murder on the weirdo. He is intelligent, but cannot ignore the evidence. The girl who appears to be his saviour, is actually for him a femme fatale. But is wasn't just the plot twists that held my attention. I felt Bart's pain, his vulnerability, his isolation. Tempted to give this five stars

The Night Clerk is a film in desperate need of a few more drafts. There’s a moment where the titular clerk goes to a convenient store to buy some ice cream and comments on the cashier’s shirt with stripes, noting it makes him dizzy in his analytical and anxious delivery. The cashier them tells him, with little emotion, F you. Even with the explanation of the clerk’s autism, it does little to excuse the meandering and tone-deaf approach.

The clerk is Bart Bromley (Tye Sheridan), an odd character who speaks in too many details and too little emotion. He works at a hotel where he keeps too close an eye on the occupants. In particular, he places cameras in the rooms so he can see everything, even peering in on the guests during his lunch break. Here’s the part that lost me quickly: Bart’s reasoning for the cameras is to overcome his awkwardness by copying the social interactions. This is essentially Bart forming an autism aspect known as masking, which is damaging but also somewhat automatic for those desparate to connect. The thing is most people with autism tend to copy from situations in public or from movies. How much social interaction techniques can one gain from peering in someone’s room when they’re mostly alone?

I get that Bart is posed this way so he can witness a murder Rear Window style and be conflicted about the evidence, but there’s another huge problem I can’t get over with this. The desire that Bart had to record the video in the first place is, perhaps unconsciously, staged to make those with autism seem more dangerous and invasive. Indeed, because Bart can’t get his story straight for the police, he becomes suspect by Detective Espada (John Leguizamo) and is rightly tracked. Bart’s mother (Helen Hunt) is also over protective and treats her son with caution by placing his dinner outside his door.

The autism aspect of this picture wouldn’t have bothered me so much if it weren’t so pronounced. In one scene where Bart meets the lovely Andrea (Ana de Armas) he starts off their conversation by saying right away he has autism and then begins explaining what it means for his ability to cope. It becomes a talking for almost everything Bart does. Espada even at one point states that these kids on the spectrum can get pretty violent. When Bart peers on Andrea taking a swim in the nude, she’s mildly appalled by him approaching her with a towel and seeing everything but then sits down and talks with him as though he’s a child who misunderstood. Their talk once again shifts to autism. Pity romance soon forms.

The Night Clerk is a film that stumbles so hard in its tackling of autism to pair it up with a thriller angle. It’s heart may be trying to manuever into the right place more than some lesser films as The Fantatic but it’s still a far bit off target. There’s some mild twists here and there and the acting is at least on point with Tye Sheridan doing his best to be awkward, Helen Hunt being her warmest, and Ana de Armas being a real charmer. But at the end of the day all of this seems more in service of infantalizing those with autism than pushing a thriller narrative, especially since it seems 70% of the dialogue is about his condition. Pair this film with The Fanatic and it’d be easy enough for those unknowing of autism to believe they are dangerous individuals in need of an institution, even with the film’s admission that institutions can be damaging.