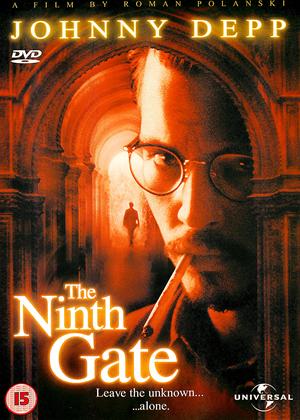 Reviews (3) of The Ninth Gate

If you are into either the occult or rare book collecting this should spin your wheels. - The Ninth Gate review by MH

Adapted from a Spanish best seller this relatively quirky, quite different thriller holds its own very well and in my opinion is one of Depp's finer films up there with Donny Brasco.

Controversial director Polanski is likely to divide the opinion of most even before they sit down to watch, but this confirms that he is familiar with hermetic imagery and given his brush with The Manson followers and involvement with would be illuminists and the fall out that followed, provides a backdrop that should get you wondering even if you haven't seen the downright creepy "Eye of the Devil" hasn't ruffled your " fact follows fiction" detective gum shoes.

Depp plays an amoral bookseller who becomes wrapped up in an ever extending chase after a famed Satanic book. Polanski's wife stars as "The Girl", we never find out who, or even what, she is; that she is another of Polanski's good looking blond Frenchies should suffice.

I originally saw this when it was released in the cinema, and wanted to see it again. The film has stood up well and still entertains. The ending is judged just right, and probably not for the hard of thinking.

Throughout the film, you are hooked by the suspense and tension in it but the ending is a little bit of a let down. The acting is great but the writer wrote too much for the middle part, but needed more for then ending.