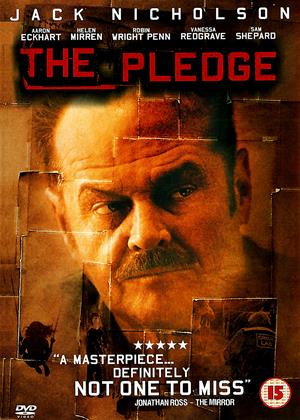 Reviews (6) of The Pledge

Penn shows maturity patience and acting knowledge in letting the actors discover those moments, rhythms, and their quirks that make characters believable.

With the purposefully shaky hand of Jack Nicholson giving its power - some developments have a natural predictability, the movie ends up taking us on a journey that is unexpected and shattering.

Forget Witches of Eastwick - The Pledge review by Popeyethetim

When you see this you realise that Nicholson CAN act. Brilliant fil. Harrowing and at the same time quite compelling.

Partly rescued by a great cast - The Pledge review by TE

Sean Penn certainly assembled a very fine cast for this, his second film as director. Apart from Jack Nicholson as lead, there are cameos for Vanessa Redgrave, Helen Mirren, Sam Shepard, Benicio Del Toro, Paricia Clarkson and Harry Dean Stanton, as well as a good role for Robin Wright Penn.

Nicholson gives one of his better late-career performances, but the whole enterprise is let down by a dull script and a far-fetched narrative. Would Lori really be attracted to the crumpled, nondescript retired cop? Would that same retired cop really try to use Lori's 8 year old daughter as "live bait" to catch a predatory paedophile?

The interest is sustained by the gritty reality of the smalltown setting, and Penn is good at giving us the incidental details.

The opening sequence tells the viewer the film's ending, which is a shame as it reduces any tension in the final section.

Enjoyed the acting, scenery and plot. Slightly disappointed by the ending, but would recommend and probably watch again.

What a cast! - The Pledge review by JD

Looking at the cast you might expect a real gem. Vanessa Redgrave, Micky Rooney, Jack Nicholson in the lead role. The plot and direction, sadly, let it down. A very ordinary detective drama. Sean Penn is definitely a better actor than director. The stunning cast with great acting keep this from being a 2 star.

Watchable but nothing special - The Pledge review by CP Customer

I had high hopes for this film as it was rated quite highly by others. Storyline is just a little too predictable for my liking.

I watched this film only a few weeks ago and already I am stuggling to remember it - clear indication that this is nothing special.