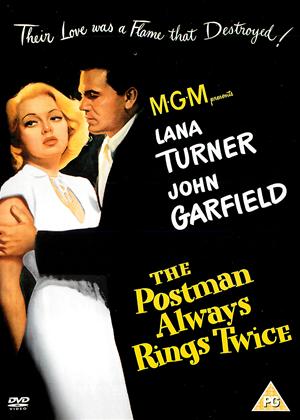 Rent other films like The Postman Always Rings Twice

A Hollywood classic that must be seen by film fans . John Garfield plays a self confessed drifter, who sees a sign for a man wanted outside a diner. Taking the job, he falls for the wife of the owner. Poisonous thoughts begin to surface in the lovers minds.

Lana Turner is just stunning as Corey the femme fatale . Her sexual allure is something to witness, and never to be forgotten, such is her performance. The scene where Garfield first lays eyes on her, when her lipstick, dropped accidently (yea if you believe that go straight to a seduction class) , rolls towards him is phenomenal. The way she looks at him, he's already hooked on her bait, even though he tries to be the one in charge of the situation, we all know who is really orchestrating. Lots of twists and turns and good performances from the rest of the cast make this a great movie, but it's Turner who takes this film into the classic stratosphere.