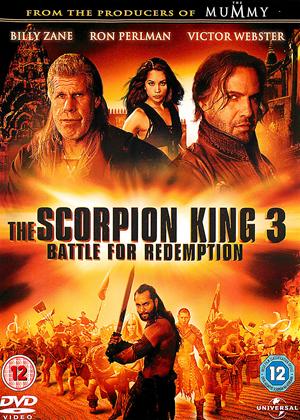 Rent other films like The Scorpion King 3: Battle for Redemption

Reviews (1) of The Scorpion King 3: Battle for Redemption

Given that the first film starring Dwayne Johnson was such a fantastic and well made film, I should have known better, seeing that there are four of these in the series, and none of them have the same actors staying on for more! Firstly this has absolutely nothing whatsoever to do with the original Scorpion King character, it feels like they simply used the name to help sales! Secondly it's full of cheap tacky sexual objectification, with female warriors wearing G-strings and the men all pecs and hairy chests pouting out. Yet for all of this, the script is dire, really unoriginal and quite simplistic, as is the storyline. The editing is all over the place and the direction is virtually none existent. This is literally a Chinese Martial Arts movie, made on location at what appear to be the Temple ruins and Jungles of Thailand. Most of the cast appear to be locals drafted in for the film and because they have very little in the way of talking parts every now and then you hear some words shouted from the sidelines in the background, which gets really annoying! You've got Roman Soldiers, Accadians, Greeks, Japanese Ninjas, all sort of characters from completely different timeframes all thrown in to create a really muddled mix, especially when the original Scorpion King was set in the Middle East at the time of the Ancient Egyptians! In all this is a very badly thought out movie, which appears to have been made on a TV Series budget, in fact I kept thinking it felt like a very cheap American-Chinese TV Series strung together into a movie. Why you've got Ninjas running up waterfalls and straight up trees, as though they are in a Chinese Martial Arts movie, obviously on wires, with Accadians, Greeks and Romans, is beyond comprehension! Whoever scripted this very clearly has no awareness of historical timelines and at one point there is even reference to Viking Gods thrown in for good measure! Just a very badly and cheaply made film, with probably more appeal to the Chinese East Asian market than anywhere else.