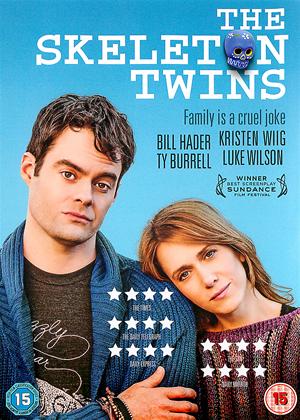 Reviews (2) of The Skeleton Twins

A very grown up film - The Skeleton Twins review by BE

An engaging mix of black and white, drama and comedy with the three main actors portraying totally believable characters. The film becomes emotionally charged at times but is interspersed with some very comical moments. The acting is superb and I did not notice one 'okay' emitting forth from any of the characters. This depicts a well crafted script as most American movies are peppered with this adjective and is something I find very irritating. The film starts on a very serious 'note' but stay with it and you'll reap the reward of having witnessed an excellent movie.

More like this, please! - The Skeleton Twins review by DW

This memorable film is like a well-crafted short story; at the end you're stimulated to wonder what preceded it & what might follow the satisfactorily open ending. I knew I was hooked when I realised I was watching most of it with a soppy grin on my face.

Plus, the lip sync episode is terrific because it's so entertaining & the lyrics tell us about this special brother & sister relationship. (It's a song by Starship but I'll leave you to find out which one).

Crazy familial relationships, vast lifestyle differences, and impromptu musical lip-syncing performances. This is The Skeleton Twins, and it is an interesting and emotional film that is sure to have people talking.

The film follows twins Maggie (Kristin Wiig) and Milo (Bill Hader). Separate events lead them to reunite after ten years of silence, and the two take this time to try and realise where their lives went wrong, and how they can fix them.

Going into this film, I had no idea what it was about. I had seen bits and pieces, but I had no indication of the story. Not being the type who adores ‘indie’ films, there were certain elements that I wasn’t attracted to. However, it was an interesting film; but don’t be fooled by the comedic moments, it is an overly emotional film that can pack a punch. Some parts will feel almost cliche, and you can guess where it is going, but you won’t care because the character relationships are the most important things.

With main cast like Bill Hader, Kristin Wiig, Luke Wilson, and Ty Burrell, you can understand why none of the secondary cast stood a chance at getting in the spotlight. The film was a successful combination of comedy and drama, with neither overshadowed by the other. The dramatic moments took up most of the film, and this makes me even more amazed that known comedic actors were even considered for the roles. I don’t know what the casting people saw in those auditions, but I am so glad they made the decisions they did.

I couldn’t pick out anything particularly notable about the directing. It had an indie feel, with less constricted camera movements, but it was nothing special.

One of the main things you will see, and love, about this film, is its realistic characters and dialogue. The conversations - particularly those between the lead brother and sister - were amazing, with Wiig and Hader playing it to near-perfection. I agree with the popular opinion that their quick and engaging rapport is more than likely from their skit history. In keeping with the realism of the film, you can see where co-writer Craig Johnson gave the leads their space to ad-lib their conversations; one about Vibram shoes ending up as Johnson’s favourite scene in the whole film.

Not just talking about that amazing impromptu musical lip-syncing scene, but the whole soundtrack did a good job of boosting the character and script work, without drawing attention to itself.

With all that this film contains, it isn’t much of a surprise that critic and audience reviews have been so positive. Of course its heavy inclusion of a homosexual character has caused some dissension, but nothing from those outside of unofficial online forums.

I have given it three out of five stars, because even though it is a brilliantly written and performed character study, elements of it felt like they were included only to be edgy and chic.