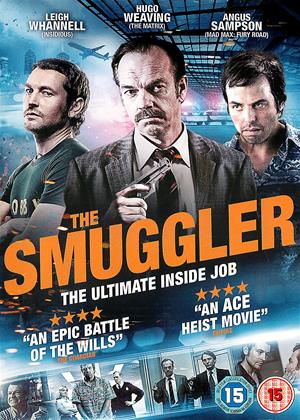 Reviews of The Smuggler

The Smuggler (aka The Mule) review by Mark McPherson - Cinema Paradiso

The Mule appears as a challenge to the filmmaker: make a compelling crime picture about a man trying to poop. What could have easily been a low-brow comedy about a drug mule trying to empty his bowels turns into something surprisingly engaging past its foul premise. From such a premise is birthed a story of real character and drama that keeps building with unique twists and double-crosses. Considering the film begins with a cavity search, it managed to win me back with grace.

It all starts with a likable protagonist. Ray Jenkins (Angus Sampson) plays a quiet and honest lad who just wants to do good, but isn’t too sure how the way everyone walks all over him. His job as a repairman garners little praise from his employer. He’s too attached to living with his parents that makes others perceive his mama’s boy status. But the local Australian football team seems to really admire his spirit for sport by celebrating his victories. His reward comes in the form of a trip to Thailand with his pal Gavin (Leigh Whannell) for smuggling drugs across the country. For acting as the mule of the drugs, Ray believes he’ll make some big score and have an in with his fellow mates. Of course, he’s just being played as the poor fool.

His silent nature unfortunately doesn’t get him through customs where he is stopped upon entering back into Australia. A brief cavity search does little to find the drugs that the AFP agents (Hugo Weaving and Ewan Leslie) believe he is concealing. Ray is then held in a hotel room until he has a bowel movement to reveal the stashed drugs. With a cartel trying to get to Ray from the outside and the AFP just as destructive and corrupt, Ray finds himself with nobody to turn to, relying on his long-term constipation to avoid prison.

I’ve always admired Angus Sampson’s presence, but he’s in one of his finest roles as the conflicted Ray. With his usual dead stare, he gives a surprising amount of dimension and growth to a character who spends the majority of the picture locked in a hotel room waiting to poop. It’s a role that requires an amazing level of subtlety and control which Sampson pulls off beautifully. You first see him as the gentle giant with few thoughts in his head and by the end of the picture he’s become a mastermind of navigating rough waters of crime. Considering he shares many scenes with Hugo Weaving, who does about as well as he can as the abusive cop, Sampson is able to hold his own.

With such a premise, one might expect the movie to go for the easiest of humor. Surprisingly, the script is played straight and as serious as the crime would be. As expected, there are a handful of scenes that involve nudity and excrement. These scenes are not played up for vulgar laughs. They’re treated with the right level of grit and disgust. Such an investigation is gross, but the script realizes it’s gross and doesn’t take advantage of that element for laughs. There’s not much to laugh about when a man’s life hangs in the balance and corrupt individuals are killing each other over drugs right outside his window. It’s a good choice of tone seeing as how the twisty crime drama and black comedy aspect works given the characters and pacing.

Who would have thought a movie about one man taking a dump could be beautifully spun in a crime picture of varying tones? The movie’s star Angus Sampson both co-directed and co-wrote this piece and he knew how to make it work. There’s real character, smarts, tension and a range of emotions both tender and dark from a movie where you wouldn’t expect much. Those willing to sit through its moments of gross will be rewarded with what awaits at the end. Would that be considered a poop joke? I assure nothing that lame is in this picture.