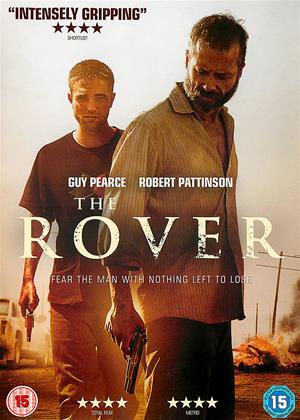 Reviews (4) of The Rover

A road movie that simply runs out of road... - The Rover review by RP

It's a post-apocalyptic (?) road movie with added Aussies. Err, that's it.

This is yet another of those films that could have been so much better. It has flashes of brilliance - for example, man drinking in bar oblivious to tumbling car crash happening behind him - outweighed by moments of weakness. Perhaps the best example of this is the ending, where the rationale for the whole film is revealed - and it's simply foolish.

The film is essentially a chase movie - Guy Pearce plays the central character who sets off after some oddballs who steal his car, dragging one of their number (played by ex-heartthrob Robert Pattinson) with him. Along the way he shoots a wide range of oddball characters - and really, that's about it.

Guy Pearce has played some great roles - remember Ed Exley in 'LA Confidential' ? - but here he seems emotionless. In fact none of the characters show much emotion - they all seem pretty passive, even when Mr Pearce is pointing a gun at them or indeed, shooting them.

This is a well photographed, well directed film (by David Michod, who directed 'Animal Kingdom') but it's a road movie that simply runs out of road...

3/5 stars. Could have been great, but ended up merely average.

This is a brilliant film and needs a little thought, rather than dismiss it as a 'road movie' :) A previous reviewer has completely missed the point of this story. Post 'Collapse' we see life as it is now for a disillusioned farmer who is at the absolute end of his tether. One small, but wholly critical incident that prompted his tirade is the 'straw' that broke the camel's back; you don't discover what until the very end and then it's just a glimpse and then one understands the whole, sad, sorry picture.Guy Pearce is consummate, Robert Pattinson surprising and the scenery evocative. Take time to watch and savour the subtle intricacies and depths of this film.

A fairly original story and Guy Pearce proves himself as a fairly convincing killer, Robert Pattinson on the other hand, I have no clue what he is doing in this film, I nearly had to turn it off he was so cringe making.

Grim and one-note - The Rover review by NP

It starts grim, it ends grim. The locations are beautifully photographed, and the minimalist score helps convey the bleakness and isolation of the piece. Guy Pearce growls intensely through his brief bouts of dialogue as Eric, and Robert Pattinson is effective as slow-minded Rey.

It is all very one note. When grimness is all there is, and there’s no lightness or shocks to break it up, the film becomes sadly dull. I found myself drifting away quite often, and I wasn’t given the impression I missed anything.

From out of the mind of Australians David Michôd and Joel Edgerton, comes the apocalyptic film The Rover. It is reminiscent of Mad Max and The Road, but manages to maintain its own identity. The story was good; the acting was good; and it might be an indication that Australian film is getting ready to battle the rest of the world.

I am a born and bred Australian. I am also an aspiring filmmaker. Despite my love for my country, I find it extremely hard to find Australian film productions that I like, but this film might just make the cut.

We begin the film ten years after the world has suffered a global economic collapse. Lawlessness prevails, and the Australian outback - even more dry, scattered, and desolate than at the best of times - is where two men set off on an unexpected journey. Eric (played by Guy Pearce) has his car stolen by a small gang of men, who leave in such a hurry, that they desert one of their own. Rey (Robert Pattinson) is left injured, and at the mercy of Eric. Rey promises to lead Eric to the group, and back to his car. Will they find the car that is so important to Eric? And will he exact revenge for the crime?

The use of the Global Financial Crisis, while not the most original, was still relatable. Everyone was affected by it, and it is a quick way to immediately connect the audience to the plight of the characters.

The acting was also commendable. Guy Pearce has been apart of some good films, and knows how to act, but he is often overlooked. It is interesting to note that writer/director David Michôd actually wrote the character with Pearce in mind, and Pearce stepped up to the plate. Robert Pattinson - who tweens will know as Edward Cullen from the Twilight series - does well to embody a totally different character. He very effectively played the semi-slow-witted Rey, along with the characters ticks.

Stylistically, it is dark and moody and emotional, which is good for the film, but you are also not given a moment to breath. It remains this emotional for the entire duration of the film, and the most successful films contain a mix of emotions.

Without giving any spoilers, I will say that not everyone will like the ending. When Pearce’s character goes so out of his way to find his car, we know there is more to the car than we know. Not everyone will appreciate the ending, and this will probably be the point that makes people either like the film, or hate it.

The film has been nominated for many awards - mostly film festival competitions - and has received quite positive online reviews.

Visually, it is a beautiful, though depressing, film, that could improve in some areas, but overall, a sign that the Australian film industry is taking notes.