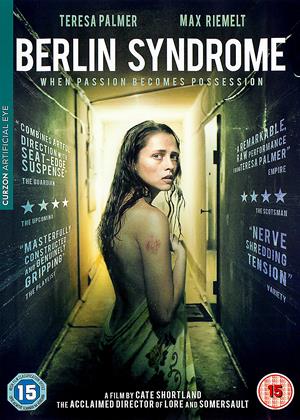 If you're a woman wandering the streets of Berlin on your own, and you end up sleeping with a guy after knowing them for about 24 hours, who lives in an apartment in a derelict block of flats where the windows don't open and there's a massive security bar across the door, as a viewer I found myself tutting throughout the opening act - this classic naivete is a horror trope. Before long she ends up his hostage, but if I say anymore I'm likely to give the game away. In short, the lead actress Teresa Palmer, is convincing. Direction is about as good as it can get for a story like this. There's some genuine suspense and the odd surprise.

The ending is woefully lacking in terms of story resolution, and due to a major lack of dialogue late in the movie, we're left guessing. Still, if I had a teenage daughter going backpacking, I'd definitely make her watch this.

This is the first film I have seen with Teresa Palmer and was in awe of her acting skills.

An anti social psychopathic teacher chats up an Australian photographer visiting Berlin. They make love in his apartment and the next day Andi goes to work. Clare has a lie in, then goes to let herself out, only to find she has been locked in. The film then focuses on the captive and her imprisoner in great detail.

Thoroughly enjoyed it, mainly down to Palmer.

This was a bit of an un-expected gem. An Australian tourist (Clare) in Berlin hooks up with a local teacher (Andi) and ends up being kept permanently against her will in his apartment. I really liked the tone and pacing of this movie and although there are a few moments to make you wince, it doesn't descend to over-the-top violence and gore. Rather, it focuses on the pyschological effects of Clare adapting to her situation and over time she does begin to exhibit small signs of Stockholm syndrome, but not to the extent that she is content with the set-up and she always desires to be free. The lead performances were very strong and I found myself captivated and really rooting for Clare.

The are a handful of well trodden cliches of the thriller/horror genre thrown into this film; and at least two events occur here that also take place in Misery (a movie this reminded me of in places). There are one or two moments where you may roll your eyes in a 'yeah, right' kind of way, but by and large Berlin Syndrome steers clear of stupidity and remains relatively realistic the whole way through. A very impressive movie.

Female backpacker meets nice local man in Berlin. They spend half an hour getting it together. You can zap that, as does the trailer. Then he keeps her locked up in his flat. That’s it. The trailer tells the whole film in less than two minutes, so watch that and save having to sit through this awful film

It might have been cheap to make, but it’s another distasteful film about a misogynistic man who tortures women. It’s unpleasant and predictable, running through all the usual clichés: she cajoles him, she fights him, she tries to escape… Whoever thought that such a grotesque story was still suitable cinema material in 2017? Shame on the female producer and female director who made it. And shame on the critics who unaccountably found merit in it.

Not original, but good - Berlin Syndrome review by SB

The central story - weird man locks up young woman - is not original (cf 'The Collector', and others), but this is a fairly competent version, set in the grimier parts of modern Berlin and with a good central performance by a de-glamorised Theresa Palmer as the Australian woman who is at first willing but finds herself trapped. The part of her captor is not played over the top. There are loose ends - it seems highly likely that in reality she could have escaped given the opportunities available - although one issue is how much she wants to do so. That however is not fully explored. And the ending is not very satisfactory.