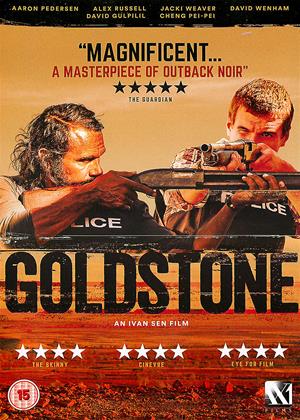 Familiar narrative in a stunning setting. - Goldstone review by TE

The barren orange-coloured outback makes for a great backdrop to this story of honest policing versus big business crime.

It's very much an old style western movie transferred to a different frontier.

Worth a watch but rather slow moving - Goldstone review by CD

The film falls between different genres and is not really strong enough on plot, characters or action to be really memorable. It is also very slow moving, not helped by the difficulty in actually hearing what the cast is saying! Still, some good characterisation and the outback backdrop is interesting.

Slow moving, slow plotted story about an investigation into the trafficking of Asian women in an Australian desert small town. Everything is as pared back as the landscape. It’s s-l-o-w. Even the score, minimal at best, is built around a plaintive piano, as is often the case in films enamoured of their own self-importance. Don’t be fooled by the DVD cover picture of our two cop heroes firing rifles. There’s only some brief out-of-character action at the climax.

The flat desert landscape is lovingly photographed, the two leads are good and there’s the kernel of a good story here, but it’s a long haul to the end credits. Shouldn’t a ‘mystery thriller’, as the writer/director calls it on the DVD extras, be dramatic?

Not quite as good as the first - Goldstone review by AB

Not as good a film as Mystery Road and Jay Swan gets to shoot rifles from a distance again!

People have said that it is slow moving but I did not find that a negative - life does not rush about in the Outback and the storyline was very plausible for a remote place. Q: How did Jay get back 'home' after his run-in with security as the plane took off? He was a bit of a physical mess after the car roll and it seemed a long walk to me to wherever he was trying to get to.

Would love to see the details on the map that he used a couple of times to try and find his way round - must be such landmarks as "3rd rock", "big sand dune" !!!