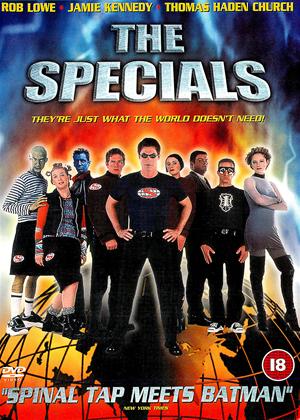 Synopsis:
For years, The Specials have been the also-rans of superheroes, getting whatever missions the better groups are too busy to take. As the 6th or 7th best superhero team in the world, The Specials are stuck with too much time on their hands. They have turned their energies inward, engaging in petty infighting, intra-group love affairs, financial squabbles and misguided attempts to better their image.
But now, that's all about to change. With The Strobe (Thomas Haden Church), The Weevil (Rob Lowe) and Amok (Jamie Kennedy) leading the way, The Specials are on the threshold of greatness. The equivalent of winning the Oscar for super-heroes, The Specials have inked a deal with the toy conglomerate KOSGRO TOYS to produce a line of action figures.
Actors:
Rob Lowe, Thomas Haden Church, Paget Brewster, Jordan Ladd, Jamie Kennedy, Mike Schwartz, Kelly Coffield Park, Sean Gunn, Judy Greer, James Gunn, Jim Zulevic, Johnny Mountain, John Doe, Abdul Salaam El Razzac, Lauren Cohn, Tom Dorfmeister, Chuti Tiu, Johann Stauf, Brian Gunn, Samantha Cannon
Directors:
Craig Mazin
Producers:
Mark A. Altman, Dan Bates, Rick Mischel
Writers:
James Gunn
Studio:
Metrodome
Genres:
Action & Adventure, Comedy

Sign up
The Gods Must Be Crazy I and II

Reviews (1) of The Specials

This film has a clever concept with a lot of potential, but fails because it isn't handled at all well. Obviously inspired, perhaps a little too much, by the infamous Justice League of America TV movie that left all the heroes anybody cared about off the roster for licensing reasons, and spent as many scenes as possible being an awkwardly comic fly-on-the-wall documentary about the characters' off-duty lives because they were cheaper to show than superheroics, this film follows a day in the lives of the Specials, "America's sixth or seventh best superhero team" (so presumably ranked somewhere between the Doom Patrol and Section Eight).

It's a great idea which in some ways prefigures the increasingly disfunctional superteams we see onscreen nowadays, but it could have been done far better. "What We Do In The Shadows" does something similar with third-rate vampires, but despite its very low budget, it manages to show us enough glimpses of them doing vampirey things to keep us aware of what they are. And "Spinal Tap" (to which this film compares itself) repeatedly shows the band performing. Here, we see almost zero evidence that these people have any superpowers at all, except for a tiny bit of CGI right at the very end, which is of course featured in the trailer in such a way as to imply that it's a major aspect of the entire film. By the halfway mark I'd completely forgotten what some of them were supposed to be able to do, which didn't matter because they never did it. With a slight rewrite, the movie could have been about any group of B-list celebrities who dress oddly and bicker.

Some of the jokes are very funny, especially near the beginning, and Thomas Haden Church easily steals the show as Strobe, the sincere but unbearably self-important team leader, but the frequent attempts to get laughs out of the fact that one hero is mentally retarded are unpleasant, and are made all the more gratuitous by the fact that another hero has an even lower mental age for a completely different reason. And sometimes the very strong language (the only reason this film has an 18 certificate) becomes tedious because the scriptwriters thought that superheroes swearing was so funny it could be used repeatedly to save them the trouble of thinking up actual jokes. Though given its penchant for utterly tasteless humor, the movie gets oddly sentimental towards the end.

Overall, this is a waste of a great idea with some pretty good bits, but not quite enough to save it. Though given the popularity of all things superheroic right now, I wouldn't be surprised if a remake hits our screens in a year or two. Besides, if DC properties as obscure as Jonah Hex can have their own movies, how long can it possibly be before it's the turn of the Inferior Five?