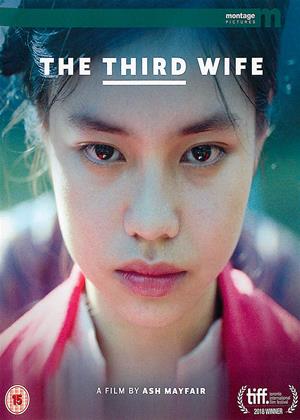 Synopsis:
In the late 19th century in rural Vietnam, fourteen-year-old May (Nguyen Phuong Tra My) is given away in an arranged marriage and becomes the third wife to her older husband. May learns that she can gain status and security if she gives birth to a male child. This becomes a real possibility when she gets pregnant. However, her path is fraught with danger when May starts to develop an attraction for Xuan (Mai Thu Huong Maya), the second wife. As May observes the unfolding tragedy of forbidden love and its devastating consequences, she must make a choice, to either carry on in silence and safety, or forge a way towards personal freedom.
Actors:
Long Le Vu, Mai Thu Huong Maya, Nguyen Phuong Tra My, Nhu Quynh Nguyen, Nguyen Thanh Tam, Lam Thanh My, Tran Nu Yên-Khê
Directors:
Ash Mayfair
Producers:
Ash Mayfair, Thi Bich Ngoc Tran
Writers:
Ash Mayfair
Studio:
Eureka
Genres:
Drama, Romance
Countries:
Vietnam, Drama, Romance

Reviews (1) of The Third Wife

Born in Ho Chi Minh City, the inspiration for Ash Myfair's debut film seems to comes from real-life stories of her grandparents and great-grandparents that have been passed down through the generations.

Set in 19th century Vietnam, this concerns the story of May (Nguyen Phuong Tra My), who is just 14 when, through an arranged marriage, she becomes the third wife of Hung (Le Vu Long), a wealthy landowner, whose word is the law on the silk plantation he runs. This sets the scene for a weighty yet in many ways subtle critique of rigid patriarchy, for while the wives snatch freedom wherever they can find it, life is confined to a transactional cycle of matrimony and reproduction at the behest of family honour.

Although the cycles of life and death that belong to the natural world are alluring, even peaceful in their persistence, there is a violent undercurrent that reveals an unjust (and enduring) feminine condition. So, even when Hung's son challenges the system by not consummating his marriage, it is, inevitably, his young bride who suffers most. And innocent as she is, May quickly perceives the wifely pecking order, so that when she gets pregnant, she innately understands that giving Hung a boy will secure her in his favour, thus recognising that as much as the women must co-operate in their pliant, companionable domesticity, they are also in biological and sexual competition with one another. Nevertheless, the possibility of freedom occasionally stirs with the breeze, and the film’s final scenes hint at desperate and defiant acts of resistance.

It's an apologetically quiet film, taking its time drifting through May’s coming of age, and its dialogue is sparse and its pace meditative. The camera lingers: on newly cut-hair flowing downstream, on Hung swallowing a glistening egg yolk from May’s tummy (a local fertility ritual?), and the bloody – and hard to watch as it looks so real – killing of a rooster. Cinematographer Chananun Chotrungroj's work is superb, and 13-year old Nguyen Phuong Tra My’s performance as May is pitch-perfect throughout. Sophisticated stuff.