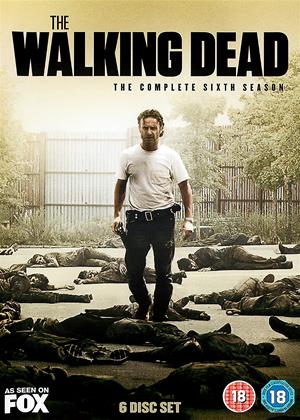 Reviews (1) of The Walking Dead: Series 6

For me this series just keeps getting better and better. Great story lines and still got the suspense. Never read the books so not bothered what changes they make for TV.

There comes a point where just about every viewer of The Walking Dead asks the same question: Do I want to stick with such a brutal show? There are several of these moments in the sixth season, aiming for a higher body count and grittier deaths. But, of course, it keeps me watching for a similar reason: How much more dark can it get?

The fifth season ended with Rick Grimes and his band of survivors not only finding sanctuary in the guarded town of Alexandria, but also staking their dominance. They’ve watched previous communities go down in flames from either poor security or lack of sane leadership. Not content to simply defend once more, Rick decides to take the fight to others. He begins by tracking down a massive herd of zombies and leading them away from Alexandria. However, nothing truly works out for Rick and it isn’t long before Alexandria finds itself under attack from both zombies and gang known as the Wolves. And when they discover some man called Negan is behind these attacks, there’s a growing need to seek out this new threat.

The first half of this season may feature some of the best episodes of the entire series. Rick’s diversion plan is grand in scope, the assault on Alexandria is chilling and there’s an engaging backstory about how Morgan came to terms with living in this new world. Several regular characters begin to come into their own and reason with their demons. In particular, Carol has the most interesting of arcs as she finds herself staring down into abyss of evil with her slipping morals. There is also quite a bit of romance that develops between the regulars, leaving just enough time for them to know and love each other in some rather sweet scenes.

But the second half of the season turns into a bit of a downgrade as the plot turns into more of a game of trying to figure out who will die next. Certain characters of Alexandria are given just enough development before being killed off, resulting in almost no new regulars from this arc. One regular loses a part of their body, but still survives. Another character is presumed dead by the end of an episode, only to later be revealed as surviving the incident in a rather cheap bit of tension. And the season finale, which finally reveals Negan in an overlong monologue, comes with a frustrating cliffhanger, which asks who Negan will kill first. All that’s missing is the 1-800 number to call in and vote for which character will die at the beginning of season seven.

Despite being such a tease of a season that goes for some easy kills and plot twists, there are still a few genuine thrills in The Walking Dead. The opening sequence of Daryl leading a swarm of Walkers slowly with his motorcycle is a pretty cool sight, as is Rick’s entire zombie lure plan. The quiet moments when character wander through the buildings of those that have already killed themselves are still creepy, even if it’s become a regular scene in the show. I even dug the lead up to Negan despite this season ending on a similar note as the fifth. But this show needs to find some better writing to perform that balancing act of a soap opera and a survival game. This is a show that should leave the viewer questioning “what will happen next?” and not “who will die next?”.