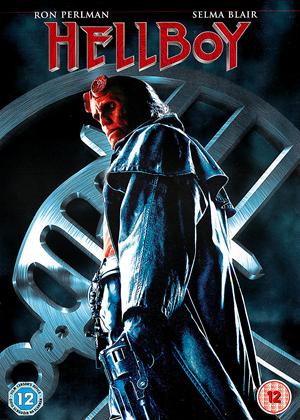 Okay I admit when I saw this film in the catalogue of titles, I had heard of it, but unlike Spider Man or X-Men had never read a single issue of the comic book itself. But I thought I won't let that put me off, let's give it a shot and I'm glad I did.

Despite being a demon brought too our world by the Nazis in 1944, Hell Boy is adopted and raised under the guidance of a paranormal expert (played by John Hurt for the most part) and becomes himself a hunter of monsters and demons.

Like Van Helsing this film is packed with action and wry humour and doesn't ever sink into the depths of corniness like some comic book films can. Hell Boy is played by actor Ron Perlman, famous for playing Vincent in the underrated TV series Beauty and the Beast and shows that besides having a dry sense of humour, a demon can have a heart.

Some great make up and CGI effects make this a visual treat but the story never takes back stage too the special effects. Fast paced but not that fast that you end up trying to catch your breath between fights, it takes some time to develop characters which is often lacking in action films.

Not in the same class as X-Men or Spider-Man but it's definitely worth a look, an enjoyable romp through comic book world indeed. Any chance of a sequel?