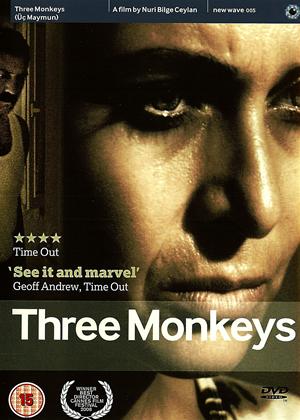 Synopsis:
Eyup takes the blame for his politician boss, Servet, after a hit and run accident. In return, he accepts a pay-off, believing it will make life for his wife Hacer and teenage son more secure. Wanting to help her son, Hacer approaches Servet for an advance, but soon gets involved with him. When Eyüp returns from prison the tension between the four reaches a climax. PLEASE NOTE THAT SUBTITLES NEED TO TURNED OFF IN THE DVD MENU IN ORDER TO WORK. THIS IS DUE THE PUBLISHERS ERROR.
Actors:
Yavuz Bingol, Hatice Aslan, Ahmet Rifat Sungar, Ercan Kesal, Cafer Köse, Gürkan Aydin
Directors:
Nuri Bilge Ceylan
Writers:
Ebru Ceylan, Ercan Kesal
Aka:
Üç maymun
Studio:
New Wave Films
Genres:
Drama
Countries:
Turkey, Drama
Awards:

I don't know whether this is Ceylan's greatest film, but it's probably one of his most accessible.

In contrast to "Climates" which is rather heavy on atmosphere and symbolism, the minimalism of "Uzak" and the slow-paced, dialogue-heavy "Winter Sleep", 3 Monkeys tells a conventionally-paced story without too many long pauses.

It offers a powerful, though not overbearing, critique of a society in which money is all-powerful and corruption is as natural as breathing. The father doesn't seem to seem to suffer from any moral dilemma about accepting his employer's pay-off, or apprehensive about going to jail - it's presented as if it's perfectly normal thing to do. At the same time, when he gets out he doesn't seem to be very excited about getting the money, but more annoyed at the wife and son spending the advance on a new car without consulting him.

Meanwhile, the wife seems to have been enjoying her new freedom. Traditional masculine honour codes haven't died out but are seen to be taking a back seat to class differences. There is one deeply uncomfortable and sexually-charged scene in which the husband can't decide whether to make love to his wife or beat her. He strongly suspects her infidelity but can't bear to openly acknowledge it because of the humiliation it would involve.

Ironically, it is left up to the son to uphold "traditional values". Discovering his mother's liaison with the politician, he decides he isn't willing to "see no evil".

The politician is not portrayed as a wicked man, but is a bit too fond of the sound of his own voice, and has an image of himself as a man of integrity which doesn't accord with reality.

I don't think this is meant to be a cynical portrait of Turkey, but more a warning that money is causing even decent people to lose sight of what matters in life.

Its no surprise Nuri won best director at Cannes for Three Monkeys. It is visually stunning and displays a gritty, sweaty and poverty ridden side to Turkey that we rarely see. The story itself is a simple one about conflicts yet you never really care about those onscreen or the explosive arguments they tumble into. The ending comes as almost a relief. Three Monkeys is a candid, vivid and bleak trip.