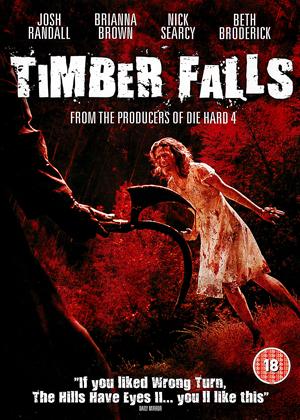 Synopsis:
In this twisted new thriller, when young couple Mike and his girlfriend Sheryl go camping in the South’s Bible belt and stake their tent in the rugged mountains of west Virginia the worst they expect are mosquitoes. What they get is a nightmare. Sheryl vanishes. There is no sign of her. Mike wanders through the woods searching on his own when he stumbles across a god-gearing woman who says she can help him. One look in the opposite direction is enough to begin his nightmare…
Actors:
Josh Randall, Brianna Brown, Nick Searcy, Beth Broderick, Sascha Rosemann, T.W. Leshner, Branden R. Morgan, Ryan McGee, Carl Bressler, Debbie Jaffe, Suzanna Urszuly, Ryan Wiik
Directors:
Tony Giglio
Writers:
Dan Kay
Studio:
High Fliers
Genres:
Horror

Sign up
The Texas Chainsaw Massacre: The Next Generation

This film is what might happen if 'Eden Lake (2008)' collided with 'The Texas Chainsaw Massacre (1974)'. It is also very convincingly played and the cinematography, directed by Tony Giglio, is nicely claustrophobic.

Yes, it follows a lot of clichés you might have seen in similar films, but it presents them alongside a real feeling of jeopardy, and the audience is rewarded with a particularly demented central plan from the protagonists, and a nasty way of going about it. The gore is enough to make you squirm, but isn't excessive, allowing the sense of danger to make its mark unencumbered by relentless shock effects.

You may have gathered that I really enjoyed this. Other opinions are out there, of course. But for me, the heroic twosome are easy to relate to, despite their matinee toned good looks, and many of their spirited endeavours to escape are thwarted, encouraging us to remain solely on their side.

The idea that the inbred family is both crushed by tragedies, gruesomely displayed in pickling jars, and have used religion to justify their extremes is an interesting one. Religion has been used many times to assert the atrocities committed by the weak-minded, it could be said to be an easy kicking target. It's important to disassociate abhorrent abuse of religion with religion itself, and the dispatch of the character of Deacon by stabbing him with a crucifix is a good deal less blasphemous than the antics of the possessed Regan in 'The Exorcist (1973)'; but it is still an easy 'stab' at irony - both as a symbol of the religion practiced by the family used against them, and the first weapon our heroes have to hand.

Josh Randall is great as Mike, stabbed, branded and battered but still capable of impressive hero skills - as is Brianna Brown as Sheryl, whose journey is a potentially harrowing one. Nick Searcy and Beth Broderick are excellent as Clyde and Ida, completely rational and reasonable about their crazed plan - at least initially.

This hits the ground running, and the intensity only gathers pace from there. My score is 8 out of 10.