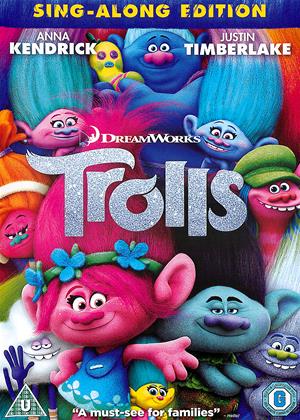 This is a good kids movie like the various Smurf incarnations to which it owes everything. Some smiles for adults but nothing really engaging an the songs are not that memorable and the characters not really likable or quirky. Leave the kids to watch in on their own unless you fancy a doze.

I watched this solely to see how music had been used, and did not expect to enjoy the animation or story. But I did. And here is why:

I LOVED the way this story does not sweep death or bad things under the carpet (like so many pc children's books these days) - a wonderful jungle sequence in the first quarter, with the usual man-eating plants etc, had me laughing wt the dog eat dog jokes. WONDERFUL animation too - calculated by a corporate team, yes, but highly imaginative.

BUT the reason why this film works is NOT the animation - as always, it is the script. That is genuinely funny, arch and has some innuendo for adults too. This film is no way just for kids!

The character arcs work and are strong.

And the music is superb because it's hand-picked from the pop archive - from Sound of Silence by Paul Simon to I Feel Love by Donna Summer and even Clint Eastwood by Gorillaz. A GREAT new song by Max Martin in Can't Stop The Feeling which was deservedly nominated for an Oscar. True Colours used well - 80s song sung by Cyndi Lauper but written by 2 blokes. The final song, however, at the very end of the credits is DREADFUL - how on earth did that get in there? To appeal to rap fans and urban communities maybe? Hmmm.

BTW watch the credits as there is an ending of the story half way through!

IThe things I HATED: 1) the way every single Disney or animation movie these days has to have a female hero - and I do mean every single one. To make her look more 'strong woman' the male characters around her are shown to be weak, cowardly, stupid. To have this in every singlke movie is now a massive sexist cliche. Do people really want to do down boys of the next generation in entertainment? Sad if you do. That does not make you strong but weak and sexist actually. HAVING SAID THAT this movie is not to bad on that as the characters are so strong.

And 2) This film is spoilt by the central pc psychobabbly very American premise that personal happiness (with endless hugs) is the most important thing in the world and being happy all the time must be everyone;s goal. WHAT ROT! Happiness is part of life, as is sadness, disappointment, anger etc. All in the round. I do wonder what message this is giving children.

BUT nevertheless, I was pleasantly surprised at ow much I enjoyed this. The movie is obviously designed to be ultra-colourful and happy throughout BUT it is well-written and with great music, and I loved it. If you're feeling a bit down, put this on and you annot fail to smile watching this mad technicolour troll-fest!

4 stars. Would be 5 were it not for the 2 points made above.

Objectively, there isn’t anything wrong with Trolls, but as an adult sharing his 5 cents on the matter, I found it, in a lack of a better word – lacking. Lacking in a way that it doesn’t put much out there for the adult audience (who look over the kids attending the picture) to enjoy. Yup, you heard it here first: Trolls is an entertaining, happy-go-lucky, even frantic at times piece that kids will enjoy and adults will find little to latch onto during its running time.

Long gone is the golden age of western cartoons where different generations could easily gather around the bonfire and put their differences aside just for a brief moment. Trolls is a post-postmodern piece that will only appeal to the youngest members of society.

As long as we’re still targeting demographics and a certain contingent of buying power, we’ll continue to produce pieces that only one particular bunch will enjoy. And I firmly believe that you CAN exploit a given genre to a widen frame within a larger demographic and still get some monies in return. Take for example Black Dynamite – a Blaxploitation parody that drains clichés to the max (intentionally) and it’s yet still watchable by every corner of the world population. Or even The Illusionist – a colorful masterpiece of animation that excited both kids and their parents and had a heart-breaking story of accepting reality as it is. And Lion King nurtured several grim themes throughout which were all accepted by the children like it was no one’s business.

Not so much with Trolls.

See, features like Angry Birds, Big Hero 6 and Trolls have multiple issues, with the most blatant one being that they’re overly Americanized to a threshold that deters the worldwide audience, pushing away moviegoers with critical thought with its stupidity and encouraging an excessive, consumerism lifestyle that is unseen in other parts of the globe. But, enough with our little rant since it’s helping no one.

The plot steals the overly used cosmogonic battle between good and evil. Evil as embodied by the bigger, gloomy trolls VS good as seen in the overly happy and frantic auto-tuned good trolls. Amidst the good ones however, a seemingly depressed individual is sick of everything and treats life with sarcasm always when he gets the chance to. So naturally, the good trolls try to convert our individual and put a smile on his frowning face. And the good trolls win. The End.

Trolls by Walt Dohrn, Mike Mitchell, starring Anna Kendrick, Justin Timberlake, Zooey Deschanel, John Cleese and a plethora of other celebrities and whatnots, feels like an extended music video that just doesn’t, for the love of god, have enough redeeming qualities to call itself a movie.

Sorry to be the Troll here, but Trolls was just not that good a film.

The animation was good though.