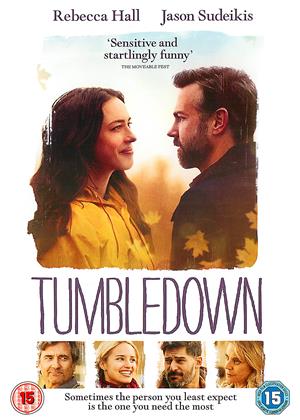 Disappointment - Tumbledown review by vs

I was looking forward to watching this given the blurb but the narrative was so weak that I gave up before the end. It was extremely difficult to listen to and as there were no subtitles given that it was filmed in the states it was impossible to follow. It sounded as if it had been recorded in a bath tub and there were two of us trying to listen so it was not due to our hearing problems.

As two actors struggle to maintain chemistry, we see side characters stealing the whole show that is supposed to show off Jason Sudeikis’ talents without him being the goofball, the comedic relief or everything in-between during his given performance in a movie. This time, he pairs with Rebecca Hall in a ‘bigger-than-life’ flick that is supposed to elicit some kind of emotions from viewers? I don’t know. Anyhow, as the two lovebirds (former “frenemies”) hop on along the ride that is life, they struggle with both their inner insecurities and their outer imperfections. And so, they conclude another chapter in Hollywood that is all-too-familiar to ever be relevant again.

The masterfully banal Tumbledown stars Rebecca Hall, Jason Sudeikis, Dianna Agron, Joe Manganiello and Blythe Danner and depicts first-world romantic concerns of said actors filling archetypal roles, despite being set almost in the middle of nowhere - Maine supposedly. Now, we’re made to believe that these people’s main issues revolve in and around writing and publishing books, all whilst their houses, retreats and whatnots are filled with furniture and memorabilia that would feed a small village near the Cote D'ivoire. So logically, they detach themselves from the real world and instead opt for an easy way out: falling in love in the most cumbersome way imaginable, film or no film.

Tumbledown by Sean Mewshaw thinks it avoids clichés, where in reality it nails each and every one of them, multiple times, without even looking. You have the grieving heroine Hannah, the stubborn and flawed trickster Andrew, and the opposing force that prevents Andrew to get what he wants – the macho archetype Curtis and of course: his own inability to look past his character’s weaknesses.

Hannah and Andrew babble the most when they happen to be around one another. “Love this, love that…” – there are instances when one cannot help oneself but produce couple of eye-rolls when our protagonists start utter universal truisms that have nothing to do with the plot, or their current predicament at the time of uttering.

One thing Tumbledown has going for it is its cinematography, which perfectly knows how to pair a rural, country girl with a clueless city dweller that doesn’t know the ways of nature. The music follows a similar pattern of introducing conflict and it’s more subtle than the visuals. The supporting cast standout is Ellen (played by Blythe Danner), whose optimistic way of life overshadows Hannah’s doom and gloom and puts things through her visor in a different perspective.

Crux of the matter is the following: Tumbledown is trying so hard to distinguish itself from other rom-coms of the similar caliber, but what it does instead is engraving its place among them and confirming to Hollywood conformity yet once again – meeting an identical fate without overstaying its welcome.

That is to say, Tumbledown will be mostly go down in history as ‘that movie that we all forgot’.