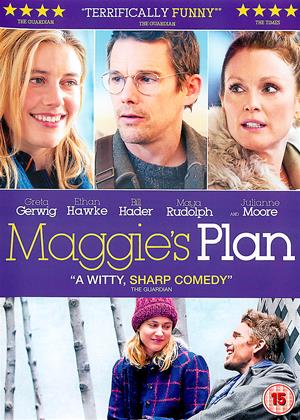 Its an enjoyable and original romance where Greta Gerwig plays Maggie,an intense young New York academic who isn't good at long term relationships but decides she wants to have a child and bring her up as a single mother. To achieve this aim she persuades a socially inept but mathematically gifted acquaintance to provide a semen sample which she then uses to try to inseminate herself. This becomes complicated by ending up on the same day in bed with a married colleague (Ethan Hawke). Unexpectedly he leaves his wife (Julianne Moore) for her and brings his two children along and a child is born to her in due course. But the relationship cools as the years pass, he becomes preoccupied with writing a novel and she ends up simply looking after him and his children. Hence Maggie's plan to get him back to his wife and leave her as the single parent she'd always intended to be, one that eventually succeeds. Greta Gerwig takes on her well established persona to great effect. Making artificial insemination by donor the plot is pretty unorthodox, although it does become rather predictable as it goes on, but its well paced with a surprisingly open ending and a nice line in the ridiculousness of academic pretensions.

Didn't really like this film. Understood the premise but not really much substance to it. Surprised at Julianne Moore bothering.

Maggie's Plan is THAT type of romantic comedy we’ve come to expect anytime Ethan Hawke’s name gets mentioned as one of the stars fulfilling cast vacancy during an otherwise artsy film draught. Maggie's Plan is ALSO that type of romantic comedy where people go around and spread seemingly nonsensical banter (a la Woody Allen style), which deeply underneath is still nonsensical, but funny. So, Maggie's Plan by Rebecca Miller is nonsensical and funny at the same time, without being too obnoxious like some of Allen’s pieces, while also being somewhat objectionably tricky. Confused much? Please bear with me and read along.

This charming piece of cinema is set in New York, in a metropolitan atmosphere that would elicit jealousy among suburban dwellers to a certain extent. The characters inhabiting mentioned area have it all: food, water, shelter, education, free time, money, health, even more free time and plenty of hobbies including, but not limited to writing for the sake of it and exercise. So, it’s only logical their only problems to involve love and to what extent one can singlehandedly raise a child.

Here enters Maggie (played by Great Gerwig), who not only wants to raise a kid, but is eager to do it without the involvement of a father. Therefore, she asks a friend to help her in her noble cause (by donating seeds, obviously), while she roams the streets and stumbles upon a certain professor John (Ethan Hawke), in your typical ‘boy meets girl’ plot we’ve all come to know and detest across the span of hundreds of clichéd variations of romantic comedies during centuries.

However, where Madame Bovary, Don Quixote and One Punch Man’s subversive message succeeds – Maggie’s Plan only continues the tradition by coiling its branches and extending said subversive tropes to further truths. For example, in an instance that should represent Hawke’s character unwillingness to cheat (he’s married btw), events unravel in such a way as to break all stereotypes of the romantic essence – whatever that may be and wherever it may finally lead.

And, more or less, it leads John right out of both previously open doors.

By no means has Maggie’s Plan copied life. Nor life ever wanted to be like Rebecca Miller’s feature in any way imaginable. It’s unrealistic and it romanticizes few things that don’t go well with real humans, i.e. when to enemies band together aiming to accomplish same goals. Long story short: Maggie’s Plan has every right to be subversive as it is, and who are we to think it should structure its plot otherwise?

In summarizing this particular feature, two words can be used: indie and subversive. But then again, aren’t all indies supposed to be that way?