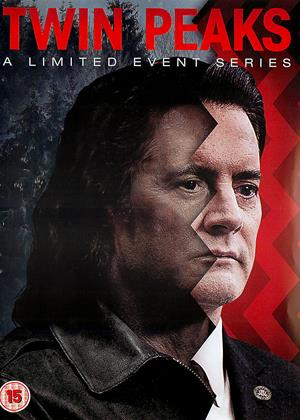 If you are old enough to remember the First series when it was shown. The odd originality, the continual mystery and the who killed Laura Palmer questions, made the series a must see. The second series started to unravel and seemed to lose much of the originality. It became an interesting yet ultimately flawed bit of storytelling. Stunning to a few and too bizarre to others. This third new series takes place many years later and again has some wonderful moments and some bizarre ones. But ultimately it feels like a good idea that just runs out of steam. Some episodes make you question the chair you are sitting in. A comfy cushion would come in handy. While others move along the legend and story nicely. A mixture of nostalgia and confusion and moments that will make you happy you bothered while others will make you ponder your sanity. Watch the original series, watch the film and then watch this. Some questions will be connected and make sense. Much of it will not. You will have to be a fan to get through it with a smile and a knowing nod. I was pleased I saw it but have decided not to take the exam if there is one. I just feel a little too peaky to turn up.

David Lynch’s return to Twin Peaks is remarkably its own beast that stands apart from its nostalgic wonderment, despite being a direct continuation of the last season from 1991. Considering that the final season had little involvement from Lynch with him only swooping for the last episode to bring about a magnificent recovery, this “Limited Event” return of 18 episodes is a long overdue jolt of what makes Lynch one of the best filmmakers out there. He doesn’t just continue the story of Twin Peaks; he reshapes and remolds his favored and familiar elements into almost an entirely different show, yet still feeling like the Twin Peaks I wanted to see.

The show picks up with most of the original cast and a few new additions. Agent Dale Cooper (Kyle MacLachlan) is in perhaps the strangest of spots, his spirit trapped inside the Black Lodge after trying to save Annie. His body, now possessed by the spirit of Bob, walks the Earth as a force of chaos. Further complicating the matters is the character of Dougie Jones (also Kyle MacLachlan), a trap of sorts set by Bob for when the other dimension comes knocking for his return. There’s a lot of Black Lodge surrealness and logic to sort out with Cooper getting back to the real world, but it builds with an innocently charming Dougie that becomes one of the sweet and hilarious highlights of the series.

That story, however, is happening in Las Vegas. What of Twin Peaks in Washington? A few things have changed, but not by much. Bobby Riggs (Dana Ashbrook) has become a Deputy Sheriff, working more with the law than against it, as he always seemed to be a well-meaning boy at heart. Deputy Sheriff Andy (Harry Goaz) and Police Department Receptionist Lucy (Kimmy Robertson) are still a cute couple, now with a loner son played by Michael Cera. Nadine (Wendy Robie) is still a little crazy, now favoring the crackpot conspiracy podcast of the psychologist Jacoby (Russ Tamblyn). Without giving too much away, most of these characters are finally granted the happiness they were seeking for years. Well, with the exception of one miserable person who can’t possibly recover from the traumatic events of the past seasons.

Elsewhere, in South Dakota, there’s a husband (Matthew Lillard) that’s been accused of murder and cannot recall where he was at a certain point in time. His is a strange case as it involves a murder of multiple people with different body parts attached, from different points in time. One body part found is from that of Major Riggs, who died many years ago, only the corpse seems to look exactly like that of a man in his 40s. Strange stuff. And it only gets stranger when the mysterious and shadowy figures of another dimension complicate, spectate and interfere with the investigation. And does it have something to do with the mysterious deaths in New York as well?

Running around tracking all of this, trying to make sense out of nonsense, are FBI Agents Gordon Cole (David Lynch) and Albert Rosenfield (Miguel Ferrer). They still have that charming back and forth with Gordon’s poor hearing that causes him to yell and Albert’s snarky short temper that causes him to yell louder. They provide not only most of the answers to the series’ biggest questions, but also a knowing contentment in dealing with the unknown and unexplainable. It’s also wickedly funny to watch Lynch mistake words and Ferrer become frustrated with everything from the weather to the Gordon’s inept listening skills. His hilarious response to the strange nature of existence: “How about a truckload of Valium?”

This third season of Twin Peaks is quite the hefty amount of story and character to take in, from the multiple murder investigations to the dozens of character arcs to the ever-evolving logic of the Black Lodge. Lynch approaches all of this with unconventional editing and non-linear storytelling that strangely seems to be well-balanced and comprehensible without feeling rushed. In fact, there are a handful of scenes that give the show time to breathe. There’s a touching moment when Dougie shuffles towards a statue and stares at it for hours, trying to figure out the reality and identity he doesn’t quite understand. Some episodes will feature a lot of going on with murders and field trips to other dimensions, while others will be slow where the highlight is Big Ed eating ramen noodles alone. And, in one of the single greatest TV episodes ever made, Lynch stops the entire story to take us to the 1950s to witness the birth of good and evil into this world.

Because of its dense material and featuring more characters in its 18 episodes than all of Game of Thrones, Twin Peaks: A Limited Event Series comes best served with recollections of the show and even the film Fire Walk With Me. You could most likely keep up with the story coming in cold, but it adds so much to see so many of these long dormant plot elements from the show payoff greatly. Ever wondered what David Bowie’s character from Fire Walk With Me was talking about when he said he wouldn’t mention Judy? You’ll find out who Judy is, more or less. Everything here is just damn fine television, served with that trademark Lynchian style of surrealness with a side of coffee and pie.