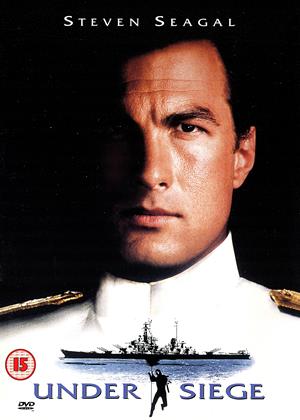 Reviews (1) of Under Siege

A very, very silly story - but quite enjoyable of its kind - Under Siege review by RP

It's a Steven Seagal film, so you know what to expect - ponytail, general mayhem, martial arts, silly plot, weak script, straight to DVD. But no, while this is no Oscar winner, it is a cut above the rest - and he hasn't got a ponytail.

It is of course a very, very silly story: baddies disguised as a rock band and led by an over-the-top Tommy Lee Jones take over a battleship and steal its cruise missiles to sell to the highest bidder. Unfortunately for them, the cook turns out to be Steven Seagal, a Navy SEAL serving out his time in a lowly job after striking an officer. He then retakes the ship single handedly (well, with some minor help from a Playboy Playmate, who also gets to show a bit of bare chest), fires the main 16" naval guns, sinks a North Korean submarine and defeats all baddies. I told you it was silly :)

Ignore the general silliness and it's quite enjoyable of its kind, so I'll give it 3/5 stars.

[Aside: the battleship is named as the USS Missouri, the last US battleship built. The surrender of Japan in World War II was signed on board and it was used for bombardment in the first Gulf War in 1991. It was finally decommissioned in 1992 and 'Under Siege' is supposedly set on its final voyage home. In fact, most of the battleship scenes were filmed on the USS Alabama which is a museum ship moored off the city of Mobile, AL]