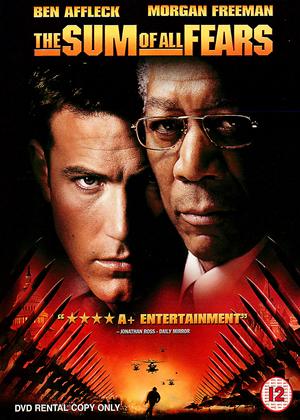 Rent other films like The Sum of All Fears

Reviews (1) of The Sum of All Fears

Based on a Tom Clancy novel, this is one of series of stories whose central character is Jack Ryan. There have been a dozen or so books and five films have been made. The films are 'The Hunt For Red October' (1990) in which Jack Ryan is played by Alec Baldwin, 'Patriot Games' (1992) and 'Clear And Present Danger' (1994) in which Harrison Ford played the role, 'The Sum Of All Fears' (2002) in which Ben Affleck took over the reins, and there is a reboot in the pipeline with 'Jack Ryan: Shadow Recruit' (2013) this time with Chris Pine in the role.

So how does Ben Affleck stack up here? My verdict: he's too young to play Jack Ryan. He's served in the Marines, has a PhD, is fluent in Russian and Ukrainian, is a respected intelligence analyst for the CIA - and he looks about 16. Nope, he's just too boyish for the role - and while Harrison Ford had a certain boyish look about him, at least he looked as if he'd got some life experience.

The film tells the story of a rich neo-Nazi terrorist (Alan Bates) who want to destroy the USA. He plans to do this by fomenting a war between the US and Russia and arranges for a nuclear bomb to go off in Baltimore. Who can save the free world from mutually assured destruction? Why, the boy wonder Jack Ryan of course.

Nope, didn't enjoy this one as much as the others, but the acting from James Cromwell (as the US President) and Morgan Freeman (who plays Morgan Freeman playing CIA Director) isn't bad. And the visual effects are OK.

But it all seems a little dated now, even though I suspect that the scenario of terrorists getting hold of a nuclear device is indeed something to be worried about. I found it all very average - and there are major differences from the book… 3/5 stars.