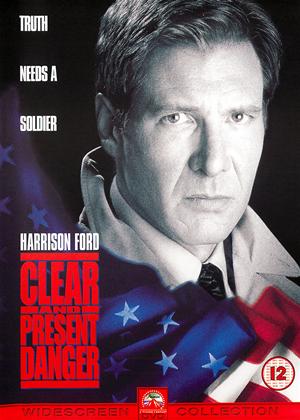 Reviews (1) of Clear and Present Danger

Great thriller - and unlike some others, not too badly dated after 20 years - Clear and Present Danger review by RP

Based on a Tom Clancy novel, this is one of series of stories whose central character is Jack Ryan. There have been a dozen or so books and five films have been made. The films are 'The Hunt For Red October' (1990) in which Jack Ryan is played by Alec Baldwin, 'Patriot Games' (1992) and 'Clear And Present Danger' (1994) in which Harrison Ford played the role, 'The Sum Of All Fears' (2002) in which Ben Affleck took over the reins, and there is a reboot in the pipeline with 'Jack Ryan: Shadow Recruit' (2013) this time with Chris Pine in the role.

Although it was made in 1994, some 20 years ago, 'Clear And Present Danger' hasn't dated as badly as some of the other films - perhaps that's because the so-call 'war on drugs' is still going on and Colombia is a still a major producer, although inevitably the computer technology has been superseded...

Here, Harrison Ford plays Harrison Ford in his usual role as the humble man - this time as modest Jack Ryan, who is promoted to Deputy Director of the CIA and gets entangled in a covert anti-drug cartel military action in Columbia. Things go wrong and he is then entangled in White House politics, but Honest Jack Ryan overcomes the political back stabbing and (of course) comes out on top.

There are good performances from Donald Moffat as the corrupt President and Willem Dafoe as John Clark, leader of the covert operation.

I enjoyed the film when I saw it in the cinema and I enjoyed it today. It has several excellent action scenes, including an outstanding one where a convoy of SUVs is ambushed - and unlike today's action thrillers there is no constant f-ing and blinding.