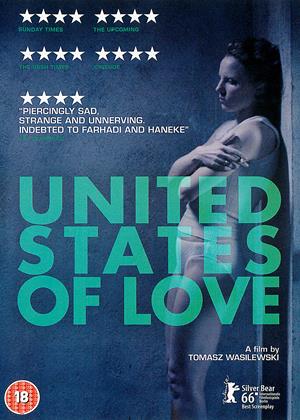 Reviews (1) of United States of Love

The male gaze - United States of Love review by RB

This is an interesting film, it is always interesting to be offered a glimpse into another country, especially at moment of transformation. It is also excellently filmed - the washed out colours, and use of colours in very specific situations, brilliantly conveys a certain mood. This could also have been an interesting film exploring women's experiences - all four scenarios are, sadly, very recognisable in different contexts and different times. But the story is told coldly, with no empathy or an attempt to understand what drives these women, what led them to be in the emotional state that we find them (or when it does, it does so in a quite shallow, clichéd kind of way). This is a story that is told from the male gaze, looking to tell the story from a male point of view and with male preconceptions, rather than a genuine attempt to understand what these women's lives are like.

Polish cinema at its finest: United States of Love is the sole raison d'être why movies were invented in the first place. Following a meticulously positioned camera movement and angles from which bits of narrative threads unravel to form what is the most poignant storyline ever put on film - Tomasz Wasilewski’s United States of Love is a true piece of art. These people do not resemble actors as in their American (possibly British) counterparts: these people ARE living, breathing human beings disguised under an actor’s paragon, if else.

The story is set in 1990s Poland, where a concept of democracy gets recently introduced. However, the townsfolk inhabiting the Eastern-European country’s concerns are identical as with the previous socialist system: they want to eat, sleep, work and possibly survive by the end of the month. The plot branches out in several subplots: that of the Catholic-raised Agata (played by Julia Kijowska) who happens to despise her marriage with a man whom she never really loved in the first place; then the flamboyant Iza (Magdalena Cielecka) who also finds herself trapped in an abusive relationship with a certain someone; and also a former beauty pageant winner Marzina (Marta Nieradkiewicz) who is eyed by Renata (Dorota Kolak) in a way that holds more secrets than what meets the eye. So, one can say these four women are the main driving force behind United States of Love, whose storylines intertwine in the most peculiar of fashion to bring us to our next point.

In other parts of the world, paradigms and governments are changing, countries evolve (or devolve for that matter) further into prospective welfare, or refuse to acknowledge their citizens altogether. Take Germany for example, whose turmoil finally leads up to final unification of its Eastern and Western block; or the final dissolution of the Soviet Union that will ultimately free Poland up from the clutches of the rigid Communism. Wasilewski treats all subjects equally on micro and macro levels, thus providing a backdrop in which our four women will live their lives onto.

And who said existing in a society-torn country is a life worth living?

Furthermore, the four lead women meet their four equal counterparts in four other men: Adam, Karol, Robert and Jacek, played by Tomasz Tyndyk, Andrzej Chyra, Marcin Czarnik and Lukasz Simlat respectively. But this is ultimately a story about the women, so these men serve lo larger purpose than to add depth into the buildups of their characters.

A fine and mature change that has been long overdue: at least in the form as depicted by (future film genius) Tomasz Wasilewski who, non-surprisingly also scribed the piece.

Bottom line: United States of Love is moving art, whether you agree with said statement or not.