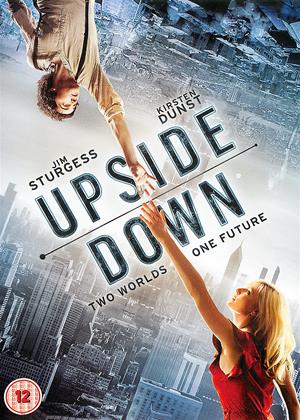 Reviews (1) of Upside Down

Physics Degree not required - Upside Down review by HG

I have got a science degree albeit Chemistry not Physics but you don't need one to watch this film unlike what I suspect are science hating critics who run away at the first mention of it and don't much like sci-fi either. It's quite clever and whilst you're thinking about how the world works and how the hero gets around it they slip in a love story that does engage although maybe not as much as Romeo and Juliet. Of course it will be accused of trying to package the romance for a male audience (I'm male and I don't mind a good romance) but it's just beautifully shot in this imaginary world. It is clearly inspired by a kind of Blade Runner meets Stardust feel and perhaps it doesn't have an audience that would identify with both but Kirsten Dunst smiles (she is very good at this) and that works for me. Don't watch is tired though - you will need to concentrate and the lack of colour might have you drifting off.

I can’t help but appreciate unique filming, be it the way the shot is angled or just the impressive nature of CGI used but Upside Down is really something else, it’s like an acid trip for two hours as you struggle to get your bearings as you are faced with not one but two worlds, each just as original. The fact that both of these worlds are visible at the same time is just part of Upside Down’s charms.

It follows Adam (Jim Sturgess) and Eden (Kirsten Dunst) as two people seperated by more than just their status but also the worlds they live in as they both live in a world where they can see each other but never touch with both their worlds being upside down from one another. The two must search for a way to bridge the gap not only between each other but their clashing societies,

While the social commentary is a little on the nose and the love story has more than a few sappy clunkers hidden within it there is a lot to look forward to in this new land with some stunningly realised designs and beautiful cinematography the world built here is top notch Sci-Fi and the attention to the smallest of details adds a certain flavour. While the sights keep you interested the same can’t be said about some of the story elements.

Not only does the plot contain some pretty considerable plot holes, even considering the lunacy of the premise but the connection between Dunst and Sturgess isn’t as strong as you would expect leaving a hole in the central idea of the film. That being said, Sturgess is excellent as the down on his luck, hopeless romantic as he does anything to get to Eden.

There is a level of concept here that is to be admired and the tale does bear fruit, especially towards the end but if anything this is a visual wonder but it fails to surprise in the fruition of its story in the way one would hope.