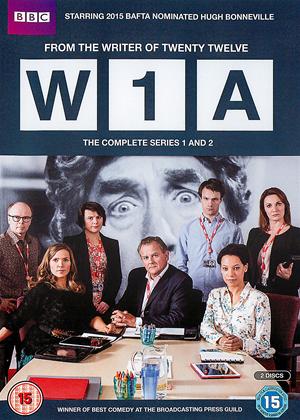 Synopsis:
When was the last time that we as a nation organised something that wasn't a complete disaster? Answer: The Twenty Twelve London Olympic Games. Conclusion: Let's get that guy in to work for us. Hence the arrival of Ian Fletcher and the start of W1A. The post is sold to Ian as a chance to influence and shape one of the great British institutions. His job is to think Big Thoughts, but it doesn't take him long to realise that not only does he not have time to think Big Thoughts, he never has time to think any thoughts at all.
Actors:
Hugh Bonneville, Monica Dolan, Jessica Hynes, Sarah Parish, Hugh Skinner, Nina Sosanya, Jason Watkins, David Westhead, Jonathan Bailey, Iván González, Rufus Jones, Ophelia Lovibond, Max Olesker, Carol Vorderman, Laurence Howarth, Emil Lager, Simon Greenall, Karen Ascoe, Alan Yentob, Salman Rushdie
Directors:
John Morton
Producers:
Paul Schlesinger
Voiced By:
David Tennant
Narrated By:
David Tennant
Writers:
John Morton
Studio:
BBC
Genres:
British TV, TV Comedies
Countries:
UK

Occasionally-funny Farce about PR + Managerialism-speak at the BBC - W1A: Series 1 and 2 review by PV

This is from the same team that made 2012 - about the Olympics. All written by John Morton who wrote People Like Us for Radio 4 which is what led to 2012 and then WIA.

Many people have called this a satire about the BBC. It isn't. It's a farce - and not about the BBC either but about the PR industry and the awful managerialist language you get in all modern corporations.

The other thing is this: it's not as funny as it thinks it is. I got very tired of the BBC waffling about what good sports they are allowing a comedy like this to be made on their promises. But really, this is NOT biting satire - it is (very) mild satire at best, but mostly farce. It's basically harmless and toothless, and not satire at all then. A real satire of the BBC (in books such as Rasmus) offends its target - and W1A is basically a harmless TV documentary spoof.

Having said all that, the use of language by the writer is exquisite in its rhythms (though some characters can get wearing). There is a real musicality and bounce to the language - as though words were ping pong balls being shot back and forth in meetings by managers who speak managerialese to try and justify their absurd job titles and huge salaries. That really IS like the BBC.

So 3.5 rounded up to 4. It was a good choice to limit each series to 4 parts. That means it stops before it could really get annoying.

Worth a watch anyway. But nowhere near as funny as it (or the BBC) thinks it is.