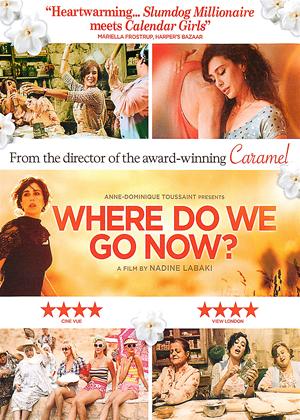 Rent other films like Where Do We Go Now?

Not a comedy in my view - Where Do We Go Now? review by CP Customer

I did like this film, but I really wouldn't describe it as a comedy. There were very few if any laughs and the underlying story is quite sad.

Lively but superficial - Where Do We Go Now? review by TE

Nadine Labaki's 2018 film 'Capernaum' is a brilliant film. This movie, 'Where Do We Go Now?' was made in 2011 and it's hard to believe it is the work of the same director.

There is an uneasy balance between slapstick comedy and serious political and religious observation. The recipe for peace is presented so simplistically that it is almost an insult to the war-battered populations in the region. This is cartoon feminism set within a shouty, comic version of serious conflicts.

Where Do We Go Now? (aka Et maintenant, on va où?) review by Alyse Garner - Cinema Paradiso

Starring the beautiful writer and director of the piece, Nadine Labaki Where Do We Go Now is a thoughtful character driven film about the religious division in a small Lebanese village. After becoming exasperated with the men around them the women of a small village in the Lebanon decide to group together and devise a plot to stop the acts of violence and revenge that have been taking place in their village because of religious differences.

The battle between Muslim and Christian believers is a hot and contemporary subject at the moment and Labaki’s choice to focus on this turmoil in the midst of a tiny community is an interesting one. The plan devised by the women of the village is a little too far fetched to truly be believed, but the writer’s intentions are good and some of the tropes she uses to express her beliefs are quite imaginative and insightful.

Despite being a largely character driven movie there is something strikingly visual about Where Do We Go Now? The use of the village landscape, along with religious iconography (including a statue of the Virgin Mary that weeps blood) as well as the symbolism of the newly introduced public television with its poor quality reception all contributes to the depth and insight of the movie as a whole.

The characters are easily the strongest part of the movie however, particularly those of the women who make the core cast; the performances given by Labaki and her colleagues are so believable and realistic it is as though they become long known and recognisable characters within the film’s first act.

The weakest point of the movie is, unfortunately, that the plot is a little stretched. The story, though interesting, was not made to cover the full length of a feature film and there are moments where you find yourself wondering why it is taking so long for them to just get to the point. Thankfully Labaki has also included some rather magical and fantastical moments, dabbling in romance and symbolism that ensure you’re never distracted for long.