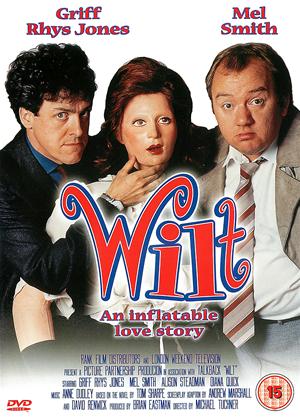 Satirical comedy laced with much vulgarity. Great in its day - but now very dated - Wilt review by RP

Back in the days when I had a very long commute, I read an enormous number of books. The only ones that made me laugh out loud - always dangerous when surrounded by other commuters - were by Tom Sharpe: 'Porterhouse Blue', 'Blott on the Landscape' - and 'Wilt'.

The books are a strange mix of satirical comedy and slapstick humour, laced with much comic sexual innuendo, poking fun at certain British institutions and small-minded pomposity. I haven't picked up a Tom Sharpe book in years and I suspect the humour may be very dated now - but I happened to chance across the film version of 'Wilt'. It's now over 25 years since it was released, so - what's it like?

With comic duo Griff Rhys Jones and the late lamented Mel Rees, together with the always excellent Alison Steadman, this should be excellent stuff. And it is - but unfortunately the on-screen humour and vulgar comic antics (much use of an inflatable sex doll), poking of fun at minor academics and their dim-witted students and at dim-witted policemen is not as funny on screen as it is on the page. And the passage of time has made what was amusing in the mid-1970s (when the book was written) and late 1980s (when the film was made) seem very dated...

Just to recap the storyline: Lowly academic Henry Wilt (Griff Rhys Jones) is suspected of murdering his wife (Alison Steadman). Local plod (Mel Rees) digs up supposed body, only to find it's a blow-up doll. Err - that's it (well, there's more in the same vein, but you get the picture).

If I'd seen it 25 years ago I might have found it wildly funny. Now, it raised but a single smile (for what it's worth, a minor joke involving a Thermos flask). Nope, it's dated and unfunny, and the comic genius of the actors is fading with time.