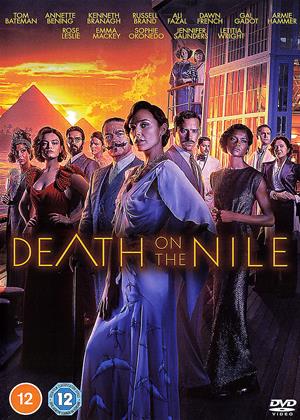 Reviews (4) of Death on the Nile

Stale Whodunnit - Death on the Nile review by GI

Kenneth Branagh's follow up to his 2017 new adaptation of Murder On The Orient Express is a disappointing film, a rather stale and routine whodunnit that feels more an extended episode of the Agatha Christie styled TV series Death In paradise. It's all very glitz and pizzazz but the characters are all two dimensional and the use of comedy actors in serious roles is jarring with the expectation they will suddenly do something zany left unfulfilled. The basic plot is that Hercule Poirot (Branagh) has been invited to join the honeymoon party of Simon (Armie Hammer) and socialite Linnet (Gal Gadot) on a riverboat touring the Nile. Also on board is the happy couples stalker Jacqueline (Emma Mackey), Simon's former lover, who is very jealous and keeps making threats etc etc. There's also a host of friends and relatives including Dawn French, Jennifer Saunders and Russell Brand (ie the comedians mentioned above). The film is more concerned with big vista shots of 1930s Egypt than building a credible plot and when people start getting murdered you'll not really care. There's a prologue set in the trenches of the First World War that is impressive but serves only to explain why Poirot has his weird moustache and just when you think the film is over there's a pointless epilogue too. A bit of a letdown that brings nothing new to the whodunnit sub genre, what a shame.

In view of the 3 star review below I thought I would send out a further polite caution to any fans of the first movie.

This movie is poor. It takes ages to get going. I think the development of Poirot's character is kind of irrelevant unless they're gone to make more. Whereas the 1st film seemed to centre on the AMAZING ensemble cast of characters and their stories and feelings this 2nd film puts Poirot at the centre. But it's just not that necessary.

I would also suggest that the original film's actors and actresses were of a completely different calibre - Michelle Pfieffer, Johnny Depp, Willem Dafoe, Judi Dench, Derek Jacobi, Josh Gad - charismatic stars that can really act. Contrast to the wooden Gal Gadot and annoying Dawn French or slightly engaging Annette Benning - you know you are on a different level.

None of the Egypt scenes were shot in Egypt. They were all CGI'd and filmed in somewhere a lot less exotic and it shows.

The actual murder only occurs probably well over half way through and to be fair its just not that exciting enough to watch Gal Gadot's performance. She should stick to more one-dimensional characters such as Wonder Woman for e.g. which works really well for her.

I do find Kenneth Branagh's Poirot watchable and this gives the film some interest but it just doesn't work as a whole film. It's not an action film and you can probably either guess the culprit or remember it (if you're over 45 and remember the 1978 version). So, the acting and characters have got to grab you. And they just don't...

I was hoping they might make a 3rd Poirot to redeem this one. But I don't see anything to support that on the web. So just like the lack and quality of the score and acting it is extremely disappointing and nothing really to redeem it - a minor upbeat note at the very end of the film but it can't overcome the downbeats, drab score and anti-climatic reveal. It looks like they've killed the Franchise on this one. Kind of feels like a theme at the moment with the Bond Films for e.g.

A sad death indeed for such a promising engaging start...

The Ultimate Disappointment - Death on the Nile review by AS

How Kenneth Branagh managed to allow himself to be sucked into present day Hollywood's mediocrity and woke nonsense is baffling. The script is so bad and the characters so wooden that it might have been written by high school teenagers. I suppose we should be grateful that they did not find a way to reveal that one or more of the players were transgender.

I had previously enjoyed Branagh's version of the Murder on the Orient Express, with all its eccentric variations on the original story. But the comic book standard of the distortions applied to Christie's Death on the Nile story is little short of appalling.

The only positive in the film is some stunningly beautiful photography.

A Mess - Death on the Nile review by NM

Oh dear, what a mess. Despite two previous successful versions to follow, access to a beautiful boat, the Nile and CGI, all is thrown away with a terrible screen play and ham acting to go with it. What was Branagh thinking? The Ustinov (1978) and Suchet (TV 2004) versions are far superior - all that was needed was a gorgeous upgrade.

Death on the Nile review by Mark McPherson - Cinema Paradiso

Kenneth Branagh’s second time taking Poirot to the big screen is a mild success but perhaps that’s because of the low bar. His version of Murder on the Orient Express was exceptionally underwhelming for the rigid performances, questionable pacing, and lack of character. Consider how Branagh appears in Death on the Nile by stepping back into the role of Hercule Poirot. His mustache seems less silly and his character better defined. That being said, it never quite feels like he’s broken into the character, even if you divorce yourself from the classic view of the character being short, fat, bald, and harboring a Belgian accent.

Poirot returns in this picture with more reveals about what’s going on inside his head. We get a backstory of his time during the war which is intriguing but perhaps longer than it should be. He at least feels less awkward in his mannerisms but that could be that Branagh opts not to lean as heavily into the accent, seeming to make it disappear until he pronounces his character’s name. It helps that this story has him reconnecting with his pal Bouc (Tom Bateman), an eccentric man who manages to find fun within Egypt. The two of them are visiting the country for a honeymoon party of the recently wed Simon (Armie Hammer) and Linnet (Gal Gadot), complete with a cruise down the Nile river.

But the cruise is disrupted when Linnet turns up dead. A likely suspect seems to be the conspiring ex of Simon’s, Jackie (Emma Mackey). But it could also be Bouc’s mother, the shrewd painter Euphemia (Annette Bening), in addition to Bouc. It could be the communist godmother of Linnet, Marie Van Schuyler (Jennifer Saunders), or her nurse, Mrs. Bowers (Dawn French). It could be the maid Louise (Rose Leslie) or the jazz singer Salome (Sophie Okonedo). Or, perhaps the one figure who sparks such a drive for murder, Andrew Katchadourian (Ali Fazal), Linnet's cousin and lawyer who desperately wanted her to sign some papers during her honeymoon. Anybody is a suspect when money is on the mind and murder is afoot.

I really loved the pacing that Branagh brings to this story, a far cry from how quickly his previous picture dove face-first into the murder without much time to know any of the characters. Here, we get to partake in the vacation and get a good read on all of the characters. We get to play detective right alongside Poirot without feeling as in the dark with the last movie. For some, this may be a hindrance but it feels like such a crucial aspect of establishing the foundation of a great murder mystery that it’s stunning to watch it unfold in this manner. It’s not only an opportune act to establish all the key players but give Poirot the chance to ease into this mystery.

The acting, however, has its hills and valleys. There are hills when watching Sophie Okonedo devour her scenes where she seems both aloof and interested in maybe having a more intimate relationship with Poirot. There are valleys when watching Gal Gadot struggle with enthusiasm and Brand button his yap to maintain some dignity. Hammer is hard to watch because he’s one of the highlights while still being one of the most problematic players in a picture that was held off for so long. Thankfully, there are some great sparks of charisma present from the likes of Tom Bateman, Annette Bening, Dawn French, Jennifer Saunders, and Letitia Wright really do shine in such a picture.

Just as with the acting, the direction also feels a bit all over the place. There is some great blocking for the scenes on the ship that use walls and glass to astounding effect, giving off an intriguing vibe throughout. But so many of the establishing shots feel like different movies. We get underwater sequences of vicious sea life but also glorious wide shots of the populace on the river as the sun rises. These shots look great on their own but create a certain inconsistency, almost feeling like they’re shots from other movies.

Death on the Nile is a better Poirot movie than Branagh’s Murder on the Orient Express, even if it still doesn’t quite feel like an adaptation of Agatha Christie’s classic character. It has a whole lot of flaws but just enough charm to warrant a pleasing picture, maintaining the mystery with a certain grace. Just don’t be expecting Branagh to be topping David Suchet’s performance anytime soon.