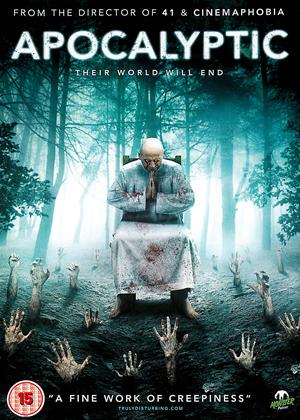 Absolutely stupid film. Who lets people waste time and money making a film like this???Maybe we should have known better than to watch it.

A well worn path through the woods - Apocalyptic review by PC

This film provides nothing new to the hand held horror genre. The acting is passable in parts but it fails to provide even one scare.

This is an example of what makes a successful found-footage picture. Two likeable film-makers Jodie and Kevin (Jane Barry/Geoff Pinfield) visit a ‘doomsday cult’ populated mainly by women and lead by Michael (David MaCrae). They appear unnaturally happy and contented. Something is clearly wrong, but answers aren’t forthcoming in any great hurry. When they come, they are covered in a subtle way – strong hints of necrophilia, murder and a not unpredictable final outcome are covered in a solid, entertaining manner. Solid is one thing, however, and I found myself wishing the excellent performances (Barry and Pinfield have great chemistry, and MaCrae succeeds in making Michael a thoroughly convincing, unhinged monster) and mood of unease could have been embellished with a few more genuinely frightening scenes. What we had, even at the end, was fairly repugnant, but not terribly frightening.

As is sometimes the case with found-footage projects, the ending is open to interpretation. Although events certainly appear to be heading in a certain direction, I didn’t expect things to end as they did. (Spoilers) There were four different endings shot, and this is the one the crew were most happy with. I’m not sure I wouldn’t have preferred the character of Kevin, who disappears towards the end, to reappear. Still, with the ending as it is, the earlier prophecy of ‘apocalypse’ might well have come to fruition …

A mention too for the tremendous cinematography. Misty early mornings and sunrises certainly make the idea of the isolated cult seem an appealing one, even if their methods were a lot less wholesome.

Yet again found footage tapes yawn , I think we have had enough of these now. The acting is poor , quite slow and boring in places .