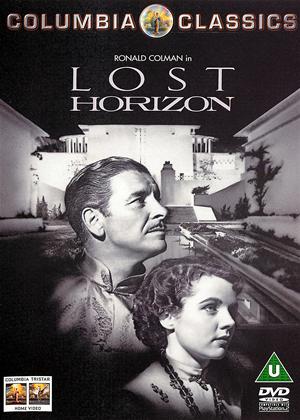 Very dated and the acting was poor generally. I wasn't sure if it was being played for laughs which was a shame because the film made a number of social points which were ahead of it's time but very relevant today's cosumer society.

How many authors create a word that takes on a life of its own, uttered at any given moment by somebody most likely with no idea of its origins? In 1933 the novelist James Hilton came up with Shangri-la for a remote, peace-loving enclave amidst Tibetan mountains, a place which few seek to leave and are rewarded with a long life.

Within four years this had become a film made in Hollywood and thereabouts by Frank Capra, a director noted for his technical skill and a relish of the inspirational. To come to this fresh is to marvel. A diplomat (Ronald Colman) is among half-a-dozen passengers aboard a small aeroplane, one of the last to leave a panicking crowd in war-torn China for Shanghai – except that, with dawn, the sun is in the wrong place, they are heading in the opposite direction while the gun-wielding pilot brooks no discussion as snowy mountains go by.

Come the inevitable crash and the pilot's death, the varied passengers, including a geologist, a fraudster and a prostitute with tuberculosis, set off, to be immediately greeted by a troop who had anticipated their arrival and been deputed to bring them back to stay in Shangri-la.

More than eight decades on, the settings make one gasp more than any computer-created pixels can do. Whiter than the surrounding snow, the building – Saltdean Lido writ large - opens upon huge, book-lined rooms, the work of two centuries, its humane magnificence down to a High Lama (Sam Jaffe) whose deputy is H.B. Warner who has something of the manner of an unfazed country parson.

All of which, when the outer world is turbulent, brings the question: should one leave? Each passenger has a different take upon this, especially Colman who had been due back in Whitehall and is likely to become Foreign Secretary. That is to reckon without somebody already there: the pretty Jane Wyatt whom he follows through meadows upon a horse, loses her – and finds her swimming in a lake (after we have seen her body double dive in naked, and it is well nigh a case of lust horizon.

Fantasy, of course, but to a purpose, all of it a debate upon the meaning of life made glorious by the abundance of film techniques whose effect is never overwrought. Since 1937, the film deteriorated into many mutilated reels, some stretches elusive. The recent restoration looks splendid, and comes with well-informed commentaries, especially upon such matters as the lighting and the building of sets.

Down the years, some have scoffed, as Graham Greene did at the time; others cannot fail to be charmed, and more.