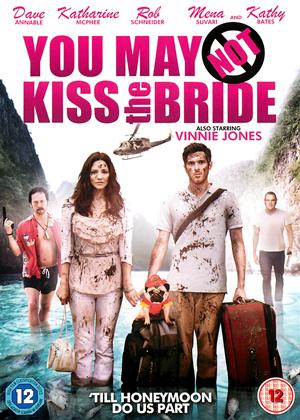 Rent other films like You May Not Kiss the Bride

Reviews of You May Not Kiss the Bride

Right off the bat You May Not Kiss the Bride makes sure to let the viewer know that this is not a conventional romantic comedy. The film's premise while a good source of surreal comedy is unintentionally hilarious in all the wrong ways.

The film follows Bryan (Dave Annable), a timid photographer that gets indebted to a crime boss and must marry his daughter Masha (Katherine McPhee) so she can get a green card. However it only gets weirder once they go on their honeymoon and everything starts hitting the fan. It's an unbelievable tale that the actors are just supposed to go with it, common sense be damned.

That being said the film has a genuinely funny, crude and lewd feel to it because of its well written dialogue thanks to writer/director Rob Hedden. It’s just that You May Not Kiss the Bride suffers from a director more suited to writing as the direction is expected and unimaginative, especially considering the unusual amount of gunfire in the films 3rd act. It’s a film that feels peculiar and not of the norm but is trying to tell a story that doesn’t match the tone or nature of the films comedy.

The film constantly flips from one type of comedy to another, from over the top cringe humour to subtle sexual humour and it does so quickly and without any notice giving you whiplash. It’s a film that is more uncomfortable than enjoyable but its well written enough to be surprising although the inconsistency causes a tone problem that ultimately becomes the films biggest problem because by the end you find yourself asking what exactly you just watched, an action film, a comedy or a romance, it doesn’t make its mind up and the film suffers because of it.