Rent Justin and the Knights of Valour (2013) 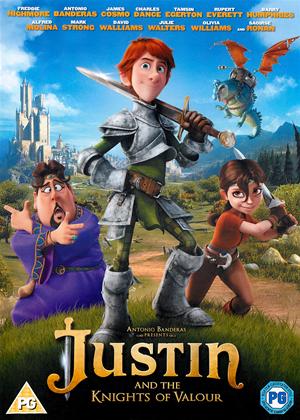 Rent other films like Justin and the Knights of Valour

Reviews (1) of Justin and the Knights of Valour

Released the same year as Jack the Giant Slayer, Justin and the Knights of Valor is surprisingly similar to the aforementioned film in more ways that one. Both features follow a hero who is not quite ready to face the monsters and villains that threaten their friends and ultimately both films amounted to little more tan a light hearted romp through movie and fairy tale cliches perpetuated by early Disney and other Hollywood studios.

The film follows Justin (Freddie Highmore) as he sets out to become a famous knight in a realm that has forsaken its courageous history in favour of laws and rules. However when one of the kingdom’s enemies re-emerges to take back the kingdom as his own Justin must face him with the help of his friends and family.

While the film has some interesting and unconventional animation that keeps the film visually interesting, the whole picture is an amalgam of many others from films like Robin Hood, How to Train Your Dragon and many others. The film tries to shoehorn in a plot theme of a world moving on from its past too quickly with poor visual gags such as a Wetherspoons type tavern Justin visits along his travels but it feels like the only original thought in the entire feature.

Despite its problems however, it’s hard not to enjoy the simplicity of the film. The story is easy to delight in as Justin makes the transition from weasley boy to admirable man while maintaining his playful personality and his hero status. It’s the main reason we like films like Tangled and Justin and the Knights of Valor, they exist in a world where right and wrong are easy to differentiate and sometimes its nice to know what the right choice is because in this film its easy to tell the difference