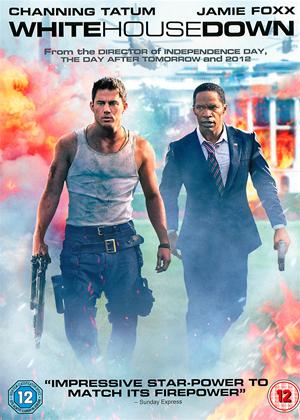 Reviews (3) of White House Down

Much more enjoyable than the similarly themed Olympus Has Fallen, it is very tongue-in-cheek and has quite a witty script. Nice that the leading character doesn't have a tragic past and the President isn't an ex-marine who can fight back by himself. Good fun if slightly overlong.

PC below has hit it on the nail with the review "Die Hard at the White House." I would add to that as I was watching it a poor man's Die Hard Bruce Willis came across. His lines lacked a certain punch and though I don't believe the film was intended to be witty, it does but I believe it was more because of lazy script writing and plot making. The special effects are a good use of 'blue screens' and computorisation and the acting is OK. However the steal of the film was Emily Cale (Joey King), whilst the adults were all in a tizz flapping like flamingos, it was the kid who was the true savior of the free world. The tenacity of her character along with Joey's acting stood out in the limited scenes she was in and only added to the film.

Would I recommend this film to others? Yes, but with the proviso that it is what it is, nothing more that 2 hours of an action packed American hammed up adventure yarn so make sure you have plenty of pop corn and Pepsi on hand (other soft drinks are available and acceptable).

This is a feel good action film for enjoying without effort. There are enough explosions and climbing lift shafts and car chases to satisfy any thrill seeker. The plot is a little unoriginal. The president and the free world are threatened, an unlikely superhero emerges. But you won't want it for the intellect.

Roland Emmerich is back with his signature loud and proud approach to action filmmaking as he turns his eyes back to destroying key US landmarks in new and unexplored ways. This time its Washington DC and the White House in particular.

The film follows DC bodyguard John Cale (Channing Tatum), an everyday guy who finds himself trapped in the White House when it is taken over by a group of armed terrorists who intend to create global conflict. With the help of President Sawyer (Jamie Foxx), Cale must try and stop the terrorists and keep his daughter Emily (Joey King) safe.

Filled with the usual American vitriol that consumes most of Emmerich’s other features, White House Down tones it down slightly and instead focuses on the insanity of the situation. Not only is the action grandiose but the film's story playfully accepts the films unbelievable premise. While fellow White House siege flick Olympus Has Fallen takes it’s story much too seriously, Emmerich accentuates the outright silly elements of the film.

Unexpectedly the film is filled with comedic moments with Foxx making his president a perfect piece of satire, right down to his Jordan sneakers. Tatum keeps up with the fast paced repartee as he leaves bullet holes and scorch marks all over the buildings famed halls. The film’s villain, Stenz (Jason Clarke) is equal parts comedian and sociopath, a character made for Emmerich who gleefully sets Clarke loose.

There are still the usual detractors like a final plot twist that feels wasted in the films final minutes, an overabundance of side characters chewing scenery and a lifeless opening but the film keeps things rolling along at lightning speed with very little regard for consequences and somehow Emmerich makes this disregard almost wonderful as Cale guns people down, destroys huge portions of this beloved landmark and quips with his new presidential pal. It may be beyond belief but its a fun piece of fiction