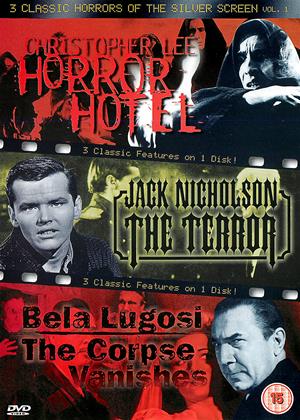 Rent other films like 3 Classic Horrors of the Silver Screen: Horror Hotel / The Terror / The Corpse Vanishes

Sign up
Journey to the Far Side of the Sun

Reviews (1) of 3 Classic Horrors of the Silver Screen: Horror Hotel / The Terror / The Corpse Vanishes

Of course you know these bargain-bin triple bills are inevitably going to consist of films which are at best second-rate, and the DVD production values won't be that great either. But it's hard to dislike these cheap and cheerful compilations, even if describing their contents as "classics" is perhaps not strictly accurate.

By far the oldest and least of these offerings is "The Corpse Vanishes", a very minor chiller so formulaic that you may think you've seen it before even if you haven't (especially if you're familiar with Larry Blamire's excellent parody "Dark And Stormy Night"). Bela Lugosi does the usual mad scientist stuff for the usual reasons, assisted by the usual generic sidekicks, including tiny Angelo Rossitto, who was in dozens of these things. However, despite his crimes being absurdly and unnecessarily specific, the police are all too mentally deficient to catch him, so it's up to the plucky wisecracking girl reporter to save the day. On the plus side, the inevitable "comic relief" character isn't black, and he's barely in the film at all. And Bela's always fun.

"Horror Hotel" is technically the best of the three. A young pre-fame Christopher Lee, struggling with an American accent, isn't really in it very much, but he certainly makes his presence felt when he is, and everybody else who's supposed to be sinister manages just fine. Its main failing is that it's creepily atmospheric rather than truly scary. Also, the pacing is oddly flat, and not a tremendous amount actually happens. However, it's a good example of an old-school "trapped in Nightmare Town where everything's a bit weird" movie, and it doesn't make it too obvious which characters will ultimately survive.

And finally, "The Terror", once described by Jack Nicholson as the only film he was ever in that didn't have a plot (presumably he'd forgotten about his walk-on cameo in "Head"). When Roger Corman finished "The Raven" under budget and ahead of schedule, he thought that, seeing as everybody had been paid in advance and they weren't due to go home yet, they might as well make another movie. Of course there was no time to write a script, so they just made it up as they went along, resulting in a chaotic story in which most of the characters don't know what's going on (some of them don't even know who they are), those that do know tell lies to everybody else including the audience, and most of what happens makes little or no sense, if they remember to explain it at all. Although Roger Corman officially directed, so did about half a dozen other people who felt like having a go, including Jack Nicholson and a very young Francis Ford Coppola. The result is the cinematic equivalent of one of those long, complicated dreams that aren't quite nightmares, but you still wake up feeling uneasy about completely random things. A real curiosity that's best watched in a spirit of pure Surrealism. By the way, if you've seen Peter Bogdanovich's "Targets", this is the movie playing at the drive-in.