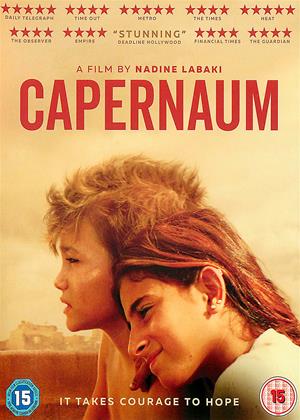 Nadine Labaki’s film is a truly astonishing piece of stark social realism generally told (apart from some pieces of rather irritating syrupy strings) without sentimentality. Set in Beirut, it starts off with the audacious (and admittedly rather dubious) premise of a young boy who's suing his parents for having him, and over the course of its two hours, by following the point of view of her young protagonist Zain, Labaki successfully articulates the impossibility of the lives that were bestowed upon him and other children he meets.

The title takes its name from the ancient fishing town of Capernaum, which in turn became the namesake for a word meaning 'disorderly accumulation of objects' or, simply, 'chaos'; and in the slums that Labaki’s characters inhabit, people, especially children, come to be a part of that disorderly accumulation as well. When the film opens, Zain (the incredible Zain Alrafeea), who guesses he’s 12 but whose stunted body looks much younger, is being taken out of prison to face his parents in court. He has a lawyer, and even though he’s already stood trial for a stabbing (the details of which we’ll come to learn) he's now the plaintiff: here to make the case that his very birth was a crime of neglect. Alrafeea is a startling, unforgettable presence, and his anger at the various cruelties and injustices around him surely mirror the director's - it's a very angry film. From the courtroom, we flash back to the series of unfortunate events that landed Zain in prison, starting with the heartbreak of seeing his 11-year-old sister Sahar sold off to be the bride of a grown man for a few chickens. It’s a devastating sequence, and 15 minutes into the film, we’re already sufficiently annoyed to wish for a life sentence for Zain’s parents. Much of the remainder of the film charts the developing relationship between Zain and Yonas, the baby boy of Rahil, an Ethiopian immigrant, and as their situation goes steadily from bad to worse, the film sometimes feels at risk of buckling under the weight of its own suffering, but is ultimately saved by the director's empathy for those lives attempting to survive in such squalor.

There's a touch of melodrama at times and some somewhat implausible sequences, but the sheer emotional force of 'Capernaum' makes this compelling viewing.

A very touching portrayal of what life is like for refugees in Lebanon. While the dialogue is spare, the acting is outstanding, in particular the young boy who struggles valiantly to deal with impossible circumstances. His relationship with the toddler, whose reactions are completely natural and must have required many hours of patient camera-work to capture, is moving and almost heroical.

Why did the little boy sue his parents? - Capernaum review by AB

Eleven year old Zain, who lives in Beirut, decides to sue his parents. Watch the film and you will found out why. It is a heart-rending tale of poverty, immigrants, and the daily struggle to survive. Zain shows compassion, courage and creativity when he finds himself looking after an adorable toddler, with no help whatsoever. A tough but rewarding watch. Subtitled.

This is a magnificent film that defies criticism with its sheer honesty and emotional punch.

At times the abject poverty and the marginal lives of the children are almost unbearable to watch. Zain al Rafeea's performance is incredibly good (and he doesn't look anywhere near as old as 12, the age he is supposed to be). The baby is, of course, not acting...but even so he deserves his own Oscar.

It is helpful to watch the short special feature film of life on the set. This offsets concerns as to the treatment of the children in the film, though the director certainly tests the boundaries of what is ethically acceptable.

Nadine Labaki goes from strength to strength as a film-maker.

This film blew me away. The acting is brilliant and the raw realism draws you in. It's a window on a part of our world that is suffering, and the characters draw the heart in. What amazing acting from Zain. It was all totally convincing and engaging. A film I will remember.

In short this is a beautifully acted and very touching film about a young lad in the slums of Beirut who takes the bold step of suing his feckless parents. It is moving, realistic and the young leads are superb. Excellent

Cannot write a review as sub titles too small and often faded into the background. Why can't distributors provided good clear subtitles ; some do i.e.white or yellow on a black background.

As other have said a really great film about the lives of others in Beirut, probably something we can never understand. Its in Arabic so needs subtitles, they are tiny, often white on a white background, does no-one preview these to check they are legible?.

This was a superb evocation of life in the slums of Beirut. Acting was very convincing which made the film gripping. For a period, although the film was always interesting, it was unclear that where (if anywhere) the whole thing was going. However in the end it all came together brilliantly, making a powerful observation.

An incredible co-operative group effort from the film production team and all the characters in the film is revealed in the footage showing the making of the story at the end of this film. The most poignant central relationship in the story of Capernaum - real life in chaos - is between a small boy and a baby, both left to care for themselves and each other in the poverty stricken suburbs of Beirut. Sad, but also very moving. And when you see the involvement of the team, the children and their real families it is all the more extraordinary.