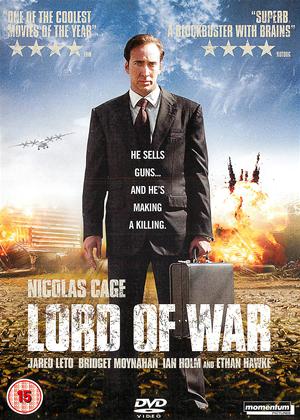 Sign of the times - Lord of War review by CP Customer

A true picturisation of the current system we live in. Shows what all governments get upto and how they deceive us all !

If you are expecting a dramatic film that's going to leave you thinking then this is it.

Nicholas Cage is on cracking form in this film about a gun runner, selling arms to the highest bidder, to men in the most volatile and bloody regions of the world.

So successful is he, that despite all the wealth it brings him, it costs him far far more in a personal way and leaves him walking a dangerous line.

Married with a kid and the government after him, can he survive rival businessmen, war zones and personal crisis?

His character is hard to consider as a hero, and yet there is a chord of sympathy struck for Cages character in this first rate, well directed and beautifully shot film.

But the cage isn't the only reason why this film will stick in the memory for a long time after watching, because it highlights the hypocriscy of governments and politics in a way that few other movies do.

Rent it and think about the films message which is, what's more important, profit or lives?

Thought provoking and chilling, if I could award movies oscars, this would get one from me for being one of the best movies I've seen in recent months.

If you're expecting a big budget crime/action thriller about an arms dealer you're going to be disappointed. 'Lord of War' is very similar in tone to the Richard Linklater film 'Fast Food Nation' in which a character based drama is used to highlight the moral ambiguity of an industry. The film charts the rise of Yuri Orlov a Ukrainian born American small arms trader who grows rich after the end of the cold war by selling ex-soviet arms to third world African dictators and warlords. Set over a number of years the film, part narrated by the character of Yuri, explores his life, his personal relationships, his constant pursuit by Interpol agents trying monitor illegal arm trades and his personal demons which question the morality of his business. Expertly written, well directed and with a surprisingly good performance from Nicolas Cage this is well worth a rental.

Not a black comedy - Lord of War review by CP Customer

Entertaining film, but disagree with the description as a black comedy.

The film includes some fairly light hearted humour in the first half; although you laugh, you do feel a little uncomfortable at doing so because of the subject matter. The poor background of the brothers and desire by Cage in particular to 'improve' his life in terms of monetary gain is explored in the beginning. We are reminded of his determination to succeed by the way he captivates the woman of his dreams. The second half of the film, particularly the scenes set in Africa, are difficult to stomach but nevertheless thought provoking. The narrative voice over by Cage adds interest.