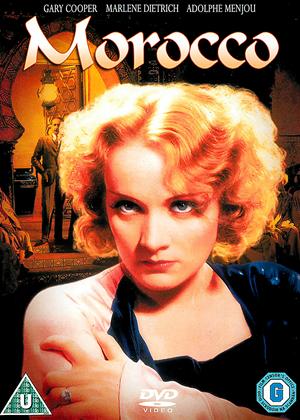 A fantastic showcase for Marlene Dietrich, which makes the most of her talents. Von Sternberg was fascinated with the actress and this shows with the lighting and camerawork when she's on screen. There is a line in the film when she says to Gary Cooper, pertaining to her question did he join the foreign Legion to forget the past, when she replies that there is a french foreign Legion for women too, but we don't have the uniform or medals. Arriving in Morocco via ship, we know nothing of her past except for the Legion quote we hear later, that gives us a clue to her fragility.

There she takes a job as a cabaret singer. She is awesome in these set pieces, smouldering and seductive in her top hat and tails. This is where she meets Gary Cooper and an on off romance ensues. Dietrich is simultaneously the seductress and a vulnerable woman in this film, which is why it's so great.

The ending is just so beautifully shot and moving, framed by the entrance gates , which reminded me of similar framing by John Ford in the Searchers. Great movie.