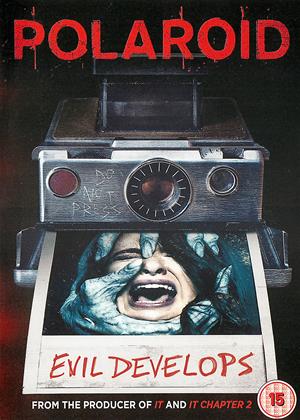 IT REMINDED ME OF THE RING. WITH ELEMENTS OF FINAL DESTINATION. THIS TIME, A CAMERA SPREADS EVIL. DON'T PICTURE THIS. DESTROYING THE IMAGES JUST BRINGS HARM TO YOU. THEN ONTO NEXT VICTM. DIMENSION FILMS WAS WEINSTEIN OWNED. RELEASED IN U.K BY DIFFERENT LABEL. SET PIECES COULD HAVE BEEN BETTER. LIGHTING OBSCURES WHAT'S GOING ON. SAW CAMEO BY MITCH PILEGGI AS SHERIFF. ENDING COMES IN A HURRY. WHICH MEANS MAYBE SCENES WERE DELETED. GOOD IDEA. COULD HAVE BETTER.

Polaroid feels like it's taken forever to come out. After a very promising trailer way back in 2019, it's finally available on DVD. Maybe the poor international box-office did it few favours, but this would be a harsh way to judge. As a Final Destination-esque horror-thriller, it works pretty well and makes more effort than some in areas such as scripting and character.

The lead is 'Bird' (Kathryn Prescott), a teen still affected by the horrific death of her father in an accident. A slight outsider at school, she works in an antique store where a friend with a crush on her gives her a camera he has found in a yard-sale. Soon, horrific things are happening and it becomes clear that the object is cursed, and that anybody who has their picture taken with it is doomed to die unless they can find a way to outsmart the curse...

The characters in Polaroid are familiar types to anyone who likes this kind of movie, but thankfully Bird has been written with a little more invention than normal. Smarter than the average slasher-movie lead, she is a compelling central presence, and is often given insightful moments of dialogue. It's not ground-breaking stuff, and the storyline isn't especially unpredictable, but it's enough to elevate many of her scenes above the average. Frustratingly, the quality of the script veers between clever moments and some nicely written fake-outs, to truly dumb dialogue that would be right at home in the year 2000. It's jolting to experience a scene where someone takes themselves in hand and decides to do some sleuthing, only to then hear a self-involved pretty-boy utter selfless dialogue that's totally un-earned, unconvincing, and completely out of character. We also get an odd moment where the devoted best friend utterly ignores her bestie in a major moment of emotional need, just so that the script can fit in some boy-meets-girl time. It's uneven. Majorly.

The scares are creepy-ish rather than 'frightening', and while they develop quite nicely, we're cheated out of any major gore or violence. This is definitely not a movie for gorehounds. It makes a nice effort at story, and does some half-decent mythologising (let down a little by some rather hammy, 'starey' bad guy flashbacks). It can also be a little distracting having Mitch Pileggi as the town sheriff among such a cast of little-known actors, which is something my other half found a huge flaw.

The special effects are decent, and there are some nice ideas. The sound design is fun, with some dramatic camera noises at key moments, and some interesting noises for the 'monster'. The visuals are also pretty good, and there are one or two fun ideas (including an ill-advised attempt to cheat the curse in the middle of a school canteen).

Ultimately it's a film that has a heavy feeling of the Final Destination influence about it, but without quite as much sparky charisma, and it's missing that film's heart-stopping death scenes.

If the idea of a Final Destination-esque horror that's light on the gore floats your boat and you can overlook a handful of flaws, this is fairly fun.