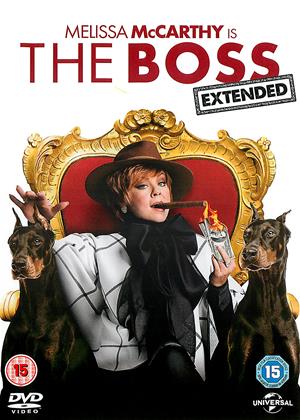 Mel does lots of films - The Boss review by NC

Pretty banal with raw dialogue. Not sure what the market would be in UK, unless like anything American

Plenty of funny moments, some are a little close to the bone, so not ideal if easily offended. But if your a fan of quick paced comedy, that doesn't take itself seriously and is easily watchable then you will find this film quite enjoyable.

Watch it again in 12 months? Probably.

Melissa McCarthy can be a likable comedic force in the case of The Heat and Spy, but then there are the awful roles which dare the audience to despise her as a main character. The Boss is sadly another case where McCarthy contorts into a disgusting individual of no morality and vile gags. It’s less of a movie and more of a test to see how far you can appreciate her comedic glaze on a very nasty script.

The only time we’re given an opportunity to feel any sympathy for Michelle (McCarthy) is relegated to the opening scene. As an orphan at a convent, Michelle is constantly adopted and returned for some unexplained reason. Tired of being tossed from family to family, she aims to make it on her own to become a top CEO without the need for friendship. That false bit of emotion is quickly kicked aside as we transition to Michelle as a shrewd business giant. She surrounds herself with yes-men, spends money on extravagant displays and is so cocky/ignorant she believes she can get away with illegal stock market moves. She’s made plenty of enemies over the years which makes it easy enough to convict her on her unlawful business tactics. Remember, she had a rough childhood so we’re apparently supposed to feel sorry for her. I reiterate this because the movie never will, believing that it’s hit its sympathy quota with this character early.

After losing her business and being convicted of her wrong doing, she seeks refuge with Claire (Kristen Bell), her former assistant who for some reason doesn’t completely hate Michelle. A better movie would have made this the section where she learns to stop living the snob life, learn some humility, value hard work and come to terms with her childhood. You know, an arc. Instead, Michelle is trotted out as the crude hero to save the day. Why Claire puts up with Michelle in her house and filling her daughter's head with vulgarity is a complete mystery. But, wait, it gets worse. She decides that her good deed is to dominate the Girl Scout cookie market by having girls sell brownies for their own profit and college funds. This is the crux of the movie’s logic - whipping up terrible scenarios, but smearing them with gimmicks to generate sympathy. Were apparently also supposed to care about her getting her company back which generates many questions as to why we’re supposed to care about this plot. Michelle is a horrible character. She learns nothing and changes nothing in her character. Who cares if she gets her company back? She deserves to lose it and the movie doesn't even give us the slightest reason to form a shred of pity for her fur-wearing snobby form to get back into business.

Why must McCarthy be such an unlikable dolt in this picture? She can be a great comedic force of gags both crude and intelligent, but not when she’s spewing bile as this horrible character. The entire picture relies on her being so shocking and graphic that you’ll be distracted by how awful she is in nearly every aspect of her life. There’s a perfect scene that encapsulates all that is Michelle when she approaches her former executives after losing her company. She fakes politeness and sorrow when she discovers that one of the executives lost their wife. A few minutes later, she’s cursing at the executives and calling the dead wife a whore who slept around the office, further insinuating that the wife is doing IT guys in the underworld. After embarrassing herself, she punctuates the scene by accidentally falling down the stairs. This is our protagonist and she will not change or learn anything from this point forward. All you have to look forward to is McCarthy repeating herself with vulgar phrases about fillatio, getting into fights with Girl Scouts and getting drunk in front of children.

The Boss requires that you check all morality and intelligence at the door. Refusal to do so will leave you with a depressing experience of characters you hate, comedy that’s tiresomely trying to hit that R rating and a story that has nothing to say about business or family. Such a picture brought back memories of McCarthy’s work on Identity Thief where she is another disgusting pig of a human being and only half-assedly made human by her love for kids. The Boss tries even less so to the point where McCarthy might as well just be a serial killer and a rapist. But, you know, for laughs, because it’s so shocking. Don't worry, I'm sure she loves puppies or something so you can sympathize somehow.