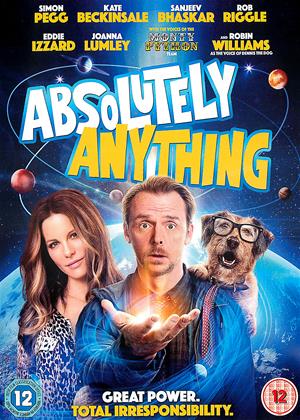 Reviews (1) of Absolutely Anything

Funny but uneven modern Monty Python movie with a wonderful dog! - Absolutely Anything review by PV

This film is written and directed by Terry Jones who also directed all the Monty Python movies. Other members of the Monty Python team also voice the aliens in this movie. It is therefore probably not surprising some parts feel very 'Monty Python' with some sequences basically copied from Life of Bryan (no spoiler).

It's basically just a version of the old story of a hero being granted wishes by a genie (or aliens here - and life of Bryan even had aliens so obviously that's a Terry Jones' fixation!)

Possibly the best bit of the movie is the dog - which Robin Williams voiced as one of his last roles before his untimely death. The dog is just Grrrrrrreat!

The plot is silly at times, especially re the American military antagonist cartoon character.

However, it all just about hangs together and is sometimes life out loud funny. Mercifully short too - and quickfire, so wherever a gag is so silly or doesn't work that well, it's OK because we're soon on to the next one!

I particularly liked the word play and misunderstandings of the Simon Pegg character's wishes!

What is not funny or good at all is the music - a track at the beginning (apparently by Roger Taylor from Queen) is dreadful; and ending track by Kylie Minogue is equally awful. SUCH a shame Eric Idle couldn't have written one of his funny songs for this film. Either that, or just have silence or a DECENT song or piece of music from the archive.

So 4 stars. We enjoyed it and laughed. Job done!