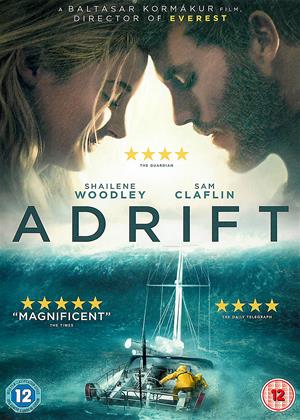 Synopsis:
Based on the incredible true story...As two avid sailors set out on a journey across the ocean, Tami Oldham (Shailene Woodley) and Richard Sharp (Sam Claflin) couldn't anticipate they would be sailing directly into one of the most catastrophic hurricanes in recorded history. In the aftermath of the storm, Tami awakens to find Richard badly injured and their boat in ruins. With no hope for rescue, Tami must find the strength and determination to save herself and the only man she has ever loved. 'Adrift' is the unforgettable story about the resilience of the human spirit and the transcendent power of love.
Actors:
Shailene Woodley, Sam Claflin, Jeffrey Thomas, Elizabeth Hawthorne, Grace Palmer, Tami Ashcraft, Siale Tunoka, Kael Damlamian, Lei-Ming Caine, Neil Andrea, Apakuki Nalawa, Tim Solomon
Directors:
Baltasar Kormákur
Producers:
Aaron Kandell, Jordan Kandell, Baltasar Kormákur, Shailene Woodley
Writers:
Aaron Kandell, Jordan Kandell, David Branson Smith, Tami Ashcraft, Susea McGearhart
Studio:
STXfilms
Genres:
Action & Adventure, Drama, Romance

Gripping, well acted and beautifully made - Adrift review by AM

As a family, we really enjoyed this film. Some of the critic reviews I have read of this film seem slightly grudging in their praise. I think this is largely because of the number of similar survival movies, such as the relatively recent All is Lost, with Robert Redford. However, this is a true story and the interleaving of the action between the initial romance and the storm and its aftermath works very well. Shailene Woodley certainly puts her heart and soul into a gritty, believable performance. The cinematography is amazing, mixing the violence of the hurricane with the sheer isolation of the open ocean, while capturing the beauty of the sea, light and land and including some interesting and unusual underwater takes.

Watched with the family and everyone enjoyed the film. I usually hate films which 'bounce around in time' but for once, this really worked. The true story is remarkable and the film brings this story to life. The leads work really well together and the twist is a great one. And as others have said, the effects don't overwhelm the film but bring it to life. If you've ever thought of sailing the world's oceans, watch this first! This film is so much better than the Robert Redford All Is Lost film. Just sayin'

Well worth the time - Adrift review by Ernie

As others have said this film tends to jump backwards and forwards in time, this is to give, I suspect, a little misdirection towards the twist at the end of the film. All said it was well received and more importantly discussed at the end.

The survival tale of Adrift, based on a true story, is constructed with a certain awareness of the subgenre. Though certainly an interesting story, based on true events in 1984, it also seems like a familiar one amid the numerous other survival tales weaved for the big screen. But in the same way the survivors make the smart and tough calls to make it another day while lost at sea, so too does the film keep its wits about it to prevent this true survival story from sinking amid the myriad of similar pictures.

Told non-linearly, Tami Oldham (Shailene Woodley) is introduced stranded on a yacht in the middle of the ocean. She is terrified and alone, desperate to find any means of prolonging life and making it to shore. Cut to a few months ago when she visits Tahiti and soon falls in love with the handsome and interesting fellow Richard Sharp (Sam Claflin). He has a range of knowledge as a British sailor and also a unique history of having hallucinations while at sea. Luck is also on his side when he receives an offer to navigate someone’s yacht back to San Diego for a hefty price, with plenty of room for Tami to tag along. Of course, that luck will run out once they’re on the water and run into a hurricane that leaves their boat a mess

This is the kind of film that is tailor-made for the lead of Shailene Woodley to really show her range of grit in a story where she is tossed about and severely battered, struggling to make the tough choices. While she has had experience in the Divergent franchise but that was a mere romp across the playground compared to this role where she has to tread through the water while bleeding and hunting for fish to preserve her life and Richard’s. In addition, she also exudes gentle charisma when conversing in Tahiti.

Where the film narrowly avoids becoming a forgettable experience is in the editing. Played straight and linear, Adrift could have gone down the route of a sweet romance for the first act and a horrifying survival tale the next. But putting the pieces together creates a more unique perspective and contrast. It helps to break up the rather passive tourist experience of Tahiti and a survival story that could have had too much dead space.

Director Baltasar Kormákur has constructed a steadfast picture that gets the job done and has just enough gravitas to make its beautiful visuals of sunsets and the oceans mean a bit more. The performances are satisfying in the bruised arm camp of acting and its well shot with many shots within a flooded boat and underwater. The location shooting in shooting Tahiti is just as gorgeous and the details of starvation and injuries sustained during the hurricane look good. I’m trying to look on the most positive aspects of the production as when you get down to the nuts and bolts, Tami’s story isn’t too deep, merely a simple one of being unlucky on the water and strong enough to make it out alive. The focus on this aspect keeps the film’s aim sharper, past drowning in melodrama and cliched theatrics. And for that, Adrift stays afloat.