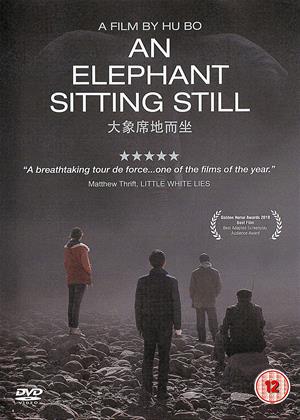 Reviews (3) of An Elephant Sitting Still

Best film of the last decade? - An Elephant Sitting Still review by MB

Yes, it's slow. Yes, it's a four-hour Chinese art film. But put it this way - I sat down at half eleven one night, absolutely knackered, just to sample the first half hour and felt compelled to watch the whole first part (105 mins) in one sitting. And I could happily have gone on and watched the rest if I'd had the disc. It's a simple story of folk in a crappy northern town, but it evolves in a fascinating and totally unpredictable way, with the camera kept up close and personal to each of the four protagonists, so we're brought into their subjective space in the most intense and convincing way I've ever experienced. The dialogue and acting is sharp and naturalistic. It's a powerful bellyache from an incredibly gifted filmmaker.

I was going to watch this 4-hour piece by director Hu Bo in short instalments, but found myself totally spellbound and instead watched it all the way through with the odd wine-break and gasp for air. I’ll be giving it another go after it has sunk in.

It’s an unremittingly bleak piece, depicting a world (literally and metaphorically) without colour - a world from which pretty much all human feeling has been lost. Instead, mistrust, manipulation, bullying, aggression, cynicism are what dominate; everyone on screen is involved in some way and to a greater or lesser extent with life's daily struggle and sheer survival.

Taking place over a single day and following the overlapping, increasingly desperate itineraries of four people, the film encompasses two suicides, several beatings, a shooting and the death of a dog; periodic eruptions of violence being a synecdoche of a deeper, widespread cruelty and alienation. For while the characters’ paths cross and recross, Hu’s sombre, careful compositions and slow takes emphasise their isolation and the social conditions that make solitude and defensiveness a protective strategy. There is occasional tenderness, but it seems fragile and fleeting, unlikely to survive the Darwinian realities: in this world, being selfish, suspicious and mean is a condition of entry.

“An Elephant Sitting Still” shows the influence of Jia Zhangke, arguably modern China’s principal cinematic depictor of disaffection and dislocation. But unrelenting as Hu’s anatomy of moral drift may be, his empathetic attention to lives defined by disappointment and diminished hope doesn’t leave us entirely bereft: by the end, the viewer is likely to feel soul-searched and deeply moved rather than simply beaten down.

But then, any catharsis may well be over-shadowed by the knowledge that this will be Hu’s only film — the sole testament to a career that ended when the 29-year-old director committed suicide in 2017. It would, of course, be a mistake to draw too direct a connection between that and what is displayed onscreen, but it’s also hard to avoid the impression that this persuasive portrait of a society in crisis reflects a deeply personal vision. Highly sophisticated and rewarding work.

This is the worst film I have even seen! Unpleasant depressing characters, confusing 'plot'. All filmed out of focus! Gave up after 1/2 hour. If, on the other hand, you are actively seeking to be depressed this might be just the film for you! I did not realise at the time of ordering that the 4/5 rating shown was not from actual ordering viewers but by 'professional' reviewers.

The following information is informative: "Hu Bo, also known by his pen name Hu Qian, was a Chinese novelist and film director, best known for his only feature film An Elephant Sitting Still. He committed suicide on 12 October 2017 at the age of 29, soon after he finished that film".