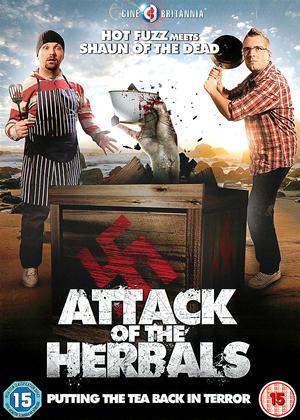 Reviews (1) of Attack of the Herbals

I’ve seen f88k awful films from Wales, Ireland, and England (mainly Essex) but Scotland (up until now) have come out ahead. Somehow Attack of the Herbals has escaped my attention and I like to watch British and Irish movies… This sorry horror-comedy is unfunny, badly acted and fairly unimaginative.

A crate of Nazi tea washes up in a crate at a remote Scottish village decades later. It stayed waterproof! When some dopey morons decide to sell the tea to the locals in a get rich quick scheme to save the post office from an evil property developer, little did they know that after drinking it the villagers would turn into zzzzzombies.

This is retrograde sixth form project made by people who thought that Shaun of the Dead would be a doddle to remake. The amateur cast struggle and literally die on camera, struggling with the shoddy script and plodding plot, which witholds the carnage for a very long, very unfunny 60 minutes or so. The only thing worse than a boring horror, is a boring and unfunny horror-comedy. This was a waste of time.

This registers some point because the sound, the camera work, the special effects worked, editing as they should. But this was far from entertaining.