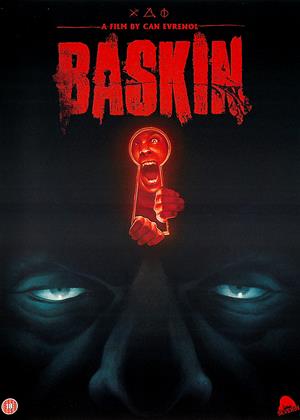 A group of loud customers are telling lewd tales and bullying staff at a café. It turns out these raucous individuals are local policemen. One feels ill and stumbles into the rest room, where he sees a frog in the soap dish. For a second, he loses his mind. When their revelry is interrupted by a call-out, the sick man continues to hallucinate, and the others become affected also.

This extraordinary Turkish horror film expertly lets us get to know the officers through their bragging, joking and eventual heart-felt reminiscences, and it is excellent. Interesting too, that each recollection reflects the sins for which the cops are later (very graphically) punished. Flawed but very real, they are also pretty funny in a brutal kind of way. So we may not be entirely on their side when horrific things begin to happen to them, but we care, almost despite ourselves.

‘Baskin’ is easy to enjoy, not only because of what it is – but also what it is not. It is not the usual possession or demonic story, with jump scares and screeching violin stings. It is a more immersive horror, dipping toes into a consistently persuasive world of events and characters ‘not being right’. The horror does not let up, but progresses all the time. That the main players are hard-bitten bullies and not shrieking young pretties, gives things an extra edge.

This is the first full-length film by Director Can Evrenol. Apparently the production team did not have permission to film in all the excellent locations, which added pressure to the 28 day/night shoot. Evrenol drenches his macabre scenes with darkness and suggestion, in a way that you are not quite sure what you have seen, but you have witnessed enough to be disturbed by it. Cinematography and Ulas Pakkan’s score (available to buy) - especially towards the end, with slow deliberation and torture at the hands of ‘Father' (Mehmet Cerrahoglu) - is as hellishly convincing as anything I’ve seen. And what a twist ending!

Who said Turkish cinema can’t be about horror? Baskin takes famous horror tropes, turns them head over heels and spits a final product that’s kind of hard to evaluate. On one hand, it’s very well made; it’s eerie, features unimaginable gore (by all standards) and ventures forth in places whence no hero, horror-junkie or otherwise, would dare to follow. On the other however, Baskin has trouble following through with its plot, and features a somewhat weak story that is being told countless times over and again. Baskin is an okay film for a first try to say the least - but comes up short when compared to other masterpieces of the same genre it occupies.

Baskin deliberately creeps in and out of focus, mistakes dreams for reality and vice versa. The camera sets its eye on seemingly irrelevant objects that will prove important for the plot further down the road. All scenes are given the atmospheric treatment and when everything falls silent – you know something is plotting to do nasty things from within the shadows. A lurker like no other.

The story is straightforward, at times feeling as if director Can Evrenol deliberately omitted explanations just to mess with one’s mental state. He leaves extensive amount of non-happenings for the audience’s own interpretation, while at the same time satisfying the needs for blood in occasional bursts of splattered somethings and walls smeared with blood by unknown wrongdoers.

Underneath, Baskin is all about simple regrets and how they can manufacture fear to spiral one’s mind out of control. It’s also a commentary about gullible people and how easy they can be manipulated into obscurity. And here obscurity equals death. Furthermore, the props, scenography and camera angles perfectly showcase how gullible and naïve folks can meet their creator stumbling upon such cults.

And oh my, was this cult beyond brutal.

As previously pointed out, amidst the cacophony of noises and visual stimuli, there is not much happening when it comes to the plot. People investigate some matters, hurry to conclusions and open doors without meaningful motivation to back their actions up. In the case of Baskin, it seems the director is more talented than what the script initially offered, but he nevertheless made up his mind to shoot this film no matter what. If that is the case - then kudos to you Can Evrenol in standing for your passion and what is ultimately right.

Also shout out to Mehmet Cerrahoglu for his portrayal of a cult leader that brings chills down the spine without uttering a single audible sentence. And when he speaks, his sole tone of voice makes you instantly hooked to his persona, and makes you want to become an acolyte to his strange, occult ways.

Baskin is a decent horror feature which could’ve been much better if only the producers aimed for a higher quality screenplay than what they’ve got.