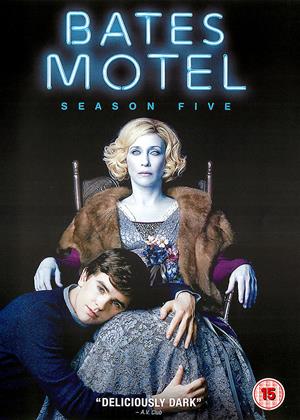 I enjoyed all 5 series of this - watched the shows back to back, and only found out recently they were made between 2012 and 2017.

Freddie Highmore is perfectly cast here. Maz Thieriot is superb as normal Dylan. Vera Farimiga grew on me as Norma, even if looking way too young and glamorous at first. I loved the character of Chick and Romero's character curve neatly mirror's Norman/Norma's.

The show pays homage to the 1960/1 Psycho movie. That is blatant here in an episode (5) with the motel shower scene... ALTHOUGH Hitchcock himself did not create that - it was storyboarded by a French scriptwriter apparently.

However, WHY did they cast Rihanna as Marion Crane. In the original movie a pretty Marliyn-Monroe-esque sexy blonde woman played her. In the EXTRA documentary here they say Rihanna was a fan of the show so cast her. WHY? She may well be a good rapper/singer (I have no idea - not my kind of music) but she is not stunningly pretty which is what is required for this character. I just did not believe the person she was in a relationship with would have a relationship with her (no spoilers). This spoilt the story for me. I suspect a reaction to #OscarsSoWhite etc and deliberate diverse casting (ie shoehorning black actors into the drama, which is set in a VERY white area of the USA actually).

There is also a pc nod to female casting with the female Sheriff. That doesn't work really. It's a copy and paste job from Fargo to tick diversity boxes again - and made me cringe.

I am so glad the series has ended here as it was in serious danger of jumping the shark and outstaying its welcome.

But these are minor points. The entire series is well paced and written, although sometimes when the plot veers off into romantic relationships away from the spooky house and motel, it loses momentum. But when it's in the motel with Norman, it's superb.

The split personality stuff is handled well despite its inaccuracy in medical terms (Ed Gein was the model for this and other mass murderers). It's also worth noting that a son loving his mother and living with her is not odd or abnormal. We wouldn't say that if a daughter did it. so why the sexism? In these times of insane soaring house prices and parents getting older nearing care, many grown-up sons and daughters will be living with mum.

To take a classic movie and mash it up like this is brave and original - those TV series that just plod on, remaking things loyally, or all those TV series which take some old book and make a dull plodding TV series (preferably set in India) are so tedious and best avoided.

But this is special. AND they even get a mention of great Welsh poet Dylan Thomas in at the end so well done for that!

The ending (no spoilers) is satisfying and right. And the soundtrack, as ever, is cool and often very British too.

Watch the extras to hear from the producers and actors.