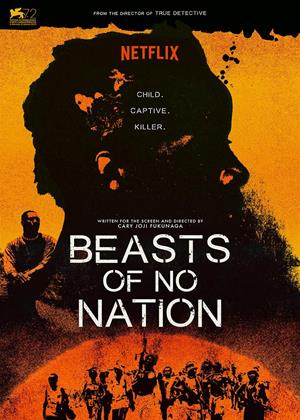 Reviews (2) of Beasts of No Nation

Stripped of innocence - Beasts of No Nation review by TB

This is a powerfully filmed depiction of war with the African war children of the NDF having their innocence stripped away by the horrors they face and are thrown into.

The warlord (Idris Elba) is fantastic but even he is surpassed in his performance by the incredible Agu (Abraham Attah) who at times needed no words in some of the scenes in delivering the power and emotion of the moment. In fact the whole cast of young actors all put in strong performances that drove the reality of the film home.

It’s a film the provides a stark reminder of the parts of our world that seem unreal to most of us but are very real to those involved in war torn countries and those conflict.

A sobering film but a film that also has subtle droplets of humanity to shine some light on a dark side of history.

There is a good "making of" piece in the extras on this blu-ray disc that shows the time and care put into achieving the high level of realism in 'Beasts of No Nation'.

As other reviewers have noted, this makes it an uncomfortable watch at times. However, the issue of child soldiers is one that needs highighting and addressing, and this film does a good job on that score.

The abuse of the children involved is physical, emotional and sexual, though the latter aspect is played down here.

Abraham Attah is excellent as Agu, the rapidly brutalised main character. It is helpful to witness the possibility of redemption and recovery at the end, but the film is honest in its assertion that hope and optimism will remain fragile.

This is a film that shows how boys can be de-humanised into a hellish form of macho masculinity, and it can make one feel despair at the human race. Its one weakness is that it tends to suggest that all this is down to evil individuals, like the Commandant (an impressive Idris Elba). There is no real analysis of the dystopian political context, but the power of the action is riveting.

Beasts of No Nation review by Mark McPherson - Cinema Paradiso

War damages children in ways we cannot fathom. When it happens, there seems to be only two kinds of people: those that serve and those that die. After the young boy Agu escapes from his village that was savaged by soldiers of revolution, he is taken in by rebel forces to be trained as a fighter. At the risk of ending up dead in a time of revolution, Agu is forced to learn the ways of the rebels in firing guns and murdering men. Childhood and family quickly become a distant memory as Agu adapts to the changing political landscape of Africa.

Throughout the film, Agu narrates his own life in the form of a journal. His thoughts are constantly shooting back to his mother and sister that left his village before the massacre and his father and brother who were not so lucky. His days of goofing off with his friends seem as though they were a lifetime ago. His only family now is a group of rebels led by The Commandant, exceptionally played by a powerful Idris Elba. The Commandant becomes a father figure to Agu and the many other children that make up his Lord of the Flies style army. He is just as much fatherly as he dangerously tyrannical. The children seek his guidance as they believe he will mold them into men when he is actually raising a collective of terrorists and rapists. The group lays waste to a village and proceed to beat and rape any civilian women they come in contact with.

Director Cary Joji Fukunaga, most recently known for his work on True Detective, has a keen sense for staging a war drama that is well-staged and emotionally driving with despair. He holds back no punches as we see all the brutality and how deeply terrifying it all is through the eyes of a child. As a right of passage, Agu is instructed by The Commandant to take a machete to the head of a captured truck driver. The driver pleads for his life as The Commandant encouragingly pushes Age to drive the blade into the cranium of their enemy. It’s a moment of shock for both Agu and the audience when he takes that dark swing towards an ugly life. Killing becomes easy and pillaging becomes his reward as morality goes as adrift as his innocence.

Beasts is another familiar tale of asking the tough questions during war about the nature of soldiers. The picture becomes quite raw at times in the way it depicts brutal violence. There’s a very ugly moment when Agu raids a village and happens upon a woman and her daughter. Agu is emotionally stricken at one point when he believes the woman to be his mother. He pulls back when he believes she is not. He shoots the mother in the head while she is raped and watches on as her daughter is stomped to death. Not exactly the easiest thing to watch even in a war movie bordering on horror.

While Abraham Attah turns in a fine performance as the learning Agu, it is Idris Elba that really steals the show as the twisted Commandant. His character is a man that is manipulative and greedy the way he convinces his legion to follow. He promises them drinks and women in exchange for their unquestioning loyalty. The boys become convinced that to please The Commandant is to do anything from serving in combat to serving him in bed. Again, not an easy film to watch.

Beasts of No Nation may not evoke anything all that new from the war movie formula, but its powerful performances make its savagery worth watching. It’s amazingly well shot with some great use of shadows and perspective during all its intense moments of combat. It hits all the right levels of emotion for portraying a child’s view of war that is anything but pleasant. It only lacks that extra kick of a message to give all its trauma and tension some meaning in the real world. But for being a fictional story, it’s a solid movie that takes all the right risks.