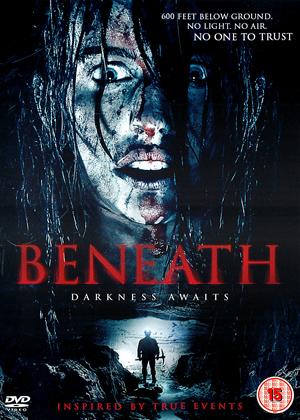 Attractive blonde Samantha Marsh (Kelly Noonan) joins a group of miners on a dig 600 feet below the surface on her father’s (Jeff Fahey) final day as foreman for the group. Today is the day in which something goes spectacularly wrong. Wouldn’t you just know it? And so, the group of hardened men and a capable but frightened woman are trapped as a mine collapses and air, putrid as it is, is starting to run out.

You have to be in the right mood to enjoy a film full of panicking people trapped in a punishing environment, as with anything really. What ‘Beneath’ does, it does very well, and you really do get a sense that the hugeness of their subterranean is made persuasively close and claustrophobic.

Among the ‘god-damns’ and the beautiful capped teeth is a real sense of there being something ‘out there’, because if the situation was not bad enough, there is also some (sadly unexplained) spiritual presence sharing the space with them, which makes its presence felt at the least welcome times.

This is a well-played, tense underground horror.

Beneath takes the fear of mining accidents and mixes it with a dose of the creepy paranormal. It’s one part fight for survival and one part haunted house in the darkness of the underground. What it lacks in any reasoning for all the scares and killings, it makes up for with an intense atmosphere and decent characters. It’s just enough to make for an entertaining horror romp that makes me forget its use of the tagline “inspired by true events.”

The movie starts out with the usual cliches for a coal mining town. A retiring miner, George Marsh, with just one day left on the job takes his daughter Samantha to get her used to her new job. They enter the mine and say goodbye to daylight. They introduce the special emergency chamber in the mine for when things go wrong and most likely will. We’re all waiting for the moment when everything goes awry and we see it coming a mile away when the machines start digging too far. The mountain cracks, the cave in begins, rocks fall, bodies are crushed and there is no way out of the dusty hole. The remaining survivors pile together in their oxygen-connected bunker, hoping the crews will find them and treat their injuries.

Seems simple enough to wait it out, but they start hearing voices of other miners that are trapped. They venture out into the darkness and find nobody. They search through the rubble, between the cracks and in the blackest of nooks. The few they do find are either mangled and gored or seek to murder their fellow crew members with blank eyes. But have they really turned into some kind of cursed individuals or are these visions just hallucinations from the lack of oxygen? The movie seems suggest a little of both, but never delivers a definitive answer. This is where the movie is going to grow frustrating as it is mystery with no end and a bit of a cheap thrill ending shot.

The plot of Beneath seems like a rather thin and lazy excuse for some moderately entrancing frights. But then I started thinking about what the film would be like if it did have an explanation of some curse or outbreak for the killer miners. How clever could a curse have been within the American setting to make any kind of historical or mythological sense? How logical could some outbreak have been if it was buried inside a mine? It would have to be an extremely well-written reasoning and I think the director and writer realized that they weren’t willing to take that plunge. Playing it safe by sticking to their strengths prevents a lukewarm horror picture from turning into a mediocre one.

Aside from the okay moments of terrors, the film boasts some strong performances from the likes of Jeff Fahey and Kelly Noonan. Most of the main characters turn in very truthful performances, acting and speaking like real and capable miners. There are very few of the classic horror cliche mistakes, though one or two mild examples are thrown in to keep things moving. This is mostly on Samantha who logically freaks out at her vision of a melting face to run in terror back to her group. She later ventures into a tent alone searching for oxygen only to have a mad killer slash and rip through the fabric. These are the few moments when you may find yourself screaming back at the screen.

I guess that’s what makes Beneath slightly more admirable in that it refuses to provide a solid answer. Without any rules clearly established, most of the horror comes as genuine surprises that while not frightening are decently crafted. It’s not a great horror film. In fact, if you take the true events angle into account, it’s rather inappropriate the way it takes such a concept and weaves a supernatural thrill out of a tragedy. Despite the inspiration, it’s a passable bit of chills that is more or less a wash of its pros making up for its cons.