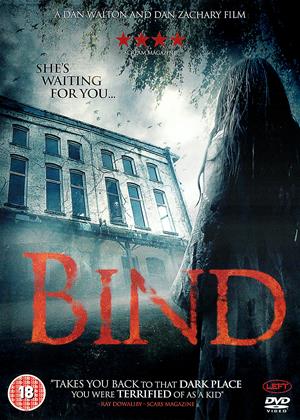 It might be considered a little unfair to rely on a group of juvenile girls to carry the establishing scenes of this low-budget chiller. Whilst the set-up is sound, there’s no denying that the acting lets things down somewhat.

Having said that, the acting isn’t the strongest element throughout ‘Bind’s' 86 minutes. The American family that we next meet, moving into their new home, have weak moments too. Conversational exchanges between them are fine, but when anger or hysteria consumes them – especially the adults – limitations are surpassed. Mum, her second husband, little daughter and the dreaded depiction of the ‘goth teen’, foul-mouthed Zoe (Mackenzie Mowat) have bought a dilapidated orphanage at a reduced rate and no-one can really blame the girls for not being enthused about living there. The building is huge and crumbling and exists next to a noisy train line.

Things start to happen. Ghostly faces at the window, shadows, and unexplained events – all achieved with a nice, creepy directorial touch from Dan Walton and Dan Zachary. There are moments of gore which look pretty good too. The location filming appears to have taken place during late summer, early Autumn, which always produces some nice long shadows and crisp, leafy mornings.

Elements of ‘The Shining’ and the ‘Amytville’ series join in the familiar ways ‘Bind’ tries to scare us and it is partially successful despite the shortcomings.

There’s a good character twist towards the end that makes sense, but only if you caught the awkward glance between daddy Ben (Darren Matheson) and Joan (Morgan Pasiuk). ‘Bind’ won’t change the world, and it doesn’t set out to redefine horror, but I enjoyed the gloomy atmospherics and occasional shock moments.