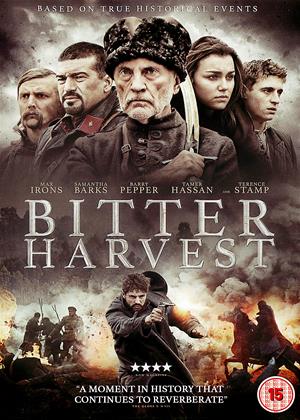 Dreadful - Bitter Harvest review by AM

A really worthy and intense subject, rarely tackled - the genocide of 10 million people by forced starvation ordered y Stalin in 1932.

The film however has treated this subject to cliched direction, shmaltzy musak, wooden filming; in all, a mess of a film. The actors try hard but can't overpower the lack of atmosphere or any sense of reality or even documentation. It's ended up as a sort of attempt at a stylisation failing miserably and looking more like an episode of a low budget TV drama.

This could have been such a brilliant film. The subject matter is a story that deserves to be told. This film however is a miserable attempt. The acting is wooden top and the characters are s dull that it's hard to care what happens to any of them. It has a budget film quality and really is a bit of a disgrace when the story deserved more.

Such an important subject, told so badly. What a shame. The film is full of cliches - at the beginning of the film the romanticised, idealistic images of Ukrainian peasantry whose lives are forever sunny whilst they harvest grain reminded me of old Hovis adverts. Sadly too many events have been trivialised and very poorly acted. And why were there no Ukranian actors in the film? Why was it all in English? Why on earth did the actors playing the Russian characters have to use pretend Russian accents? This era of history deserves strong storytelling - this film failed dismally.

Soporific when it could have been terrific. - Bitter Harvest review by MK

As with the above reviews, I hired this in the expectation of something much more. Wooden character portrayals (the 'romance' / love interest was supposed to tie it all together?), ghastly music (I actually turned the sound off a couple of times) and a missed opportunity to tell the story of Stalin's murderous rule over the people of Ukraine.

This is a necessary film about a serious subject - the deliberate Ukrainian famine of 1932-33 in which Stalin and the Soviets deliberately starved to death 7-10 million people. And people still wonder why Ukraine wanted so badly to be independent (and why some sided with Nazis against Soviets in WWII). Watch this and learn.

Yes, it's low budget - but I disagree with the 1 and 2 star reviews here which are too harsh. The film is well-plotted and hangs together well - yes, the romance part is silly BUT I'd say ALL Hollywood movies think they have to have this to appeal to the female audience. Expect more of this as more women's movies get made (which I won't watch).

Anyone who thinks Socialism leads to Utopia should watch this movie which shows what happens when the state has all control. Disaster! Oppression! Dictatorship!

It made me laugh when one Soviet butcher accuses a Ukrainian of being 'reactionary' - well, that is a favourite term of abuse used by leftwing academics, aimed at anyone who states opinions they disagree with. That speaks volumes.

A flawed but excellent film. 4 stars.